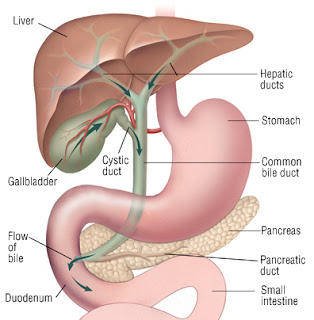 Introduction: Cancer of the gallbladder is rare, constituting less than 1% of all cancer cases. It’s usually found coincidentally in patients with cholecystitis; 1 in 400 cholecystectomies reveals cancer.
This disease is most prevalent in women over age 60. It’s rapidly progressive and usually fatal; patients seldom live 1 year after diagnosis. The poor prognosis is because of late diagnosis; gallbladder cancer usually isn’t diagnosed until after cholecystectomy, when it’s typically in an advanced, metastatic stage.
Extrahepatic bile duct cancer is the cause of about 3% of all cancer deaths in the United States. It occurs in both men and women between ages 60 and 70 (incidence is slightly higher in men). The usual site is at the bifurcation in the common duct.
Cancer at the distal end of the common duct is commonly confused with pancreatic cancer. Characteristically, metastasis occurs in local lymph nodes and in the liver, lungs, and peritoneum.

Causes
Many consider gallbladder cancer a complication of gallstones. This inference rests on circumstantial evidence from postmortem examinations: 60% to 90% of all gallbladder cancer patients also have gallstones. Postmortem data from patients with gallstones show gallbladder cancer in only 0.5%.
Adenocarcinoma accounts for 85% to 95% of all cases of gallbladder cancer; squamous cell carcinoma accounts for 5% to 15%. Mixed-tissue types are rare.
Lymph node metastasis is present in 25% to 70% of patients at diagnosis. Direct extension to the liver is common (46% to 89% of patients); direct extension to the cystic and the common bile ducts as well as the stomach, colon, duodenum, and jejunum produces obstructions. Metastasis also occurs through the portal or hepatic veins to the peritoneum, ovaries, and lower lung lobes.
The cause of extrahepatic bile duct cancer isn’t known, but statistics reveal an unexplained increased incidence of this cancer in patients with ulcerative colitis. This association may be attributed to a common cause —perhaps an immune mechanism or chronic use of certain drugs by the patient with colitis.
Signs and symptoms
Clinically, gallbladder cancer is almost indistinguishable from cholecystitis. The signs and symptoms of both disorders include pain in the epigastrium or right upper quadrant, weight loss, anorexia, nausea, vomiting, and jaundice. Chronic, progressively severe pain in an afebrile patient suggests cancer.

With simple gallstones, the pain is sporadic.
Another telling clue to cancer is a palpable gallbladder (in the right upper quadrant) with obstructive jaundice. Some patients may also have hepatosplenomegaly.
Signs of bile duct cancer
Progressive, profound jaundice is commonly the first sign of obstruction caused by extrahepatic bile duct cancer. The jaundice is usually accompanied by chronic pain in the epigastrium or right upper quadrant, radiating to the back. Other common symptoms, if associated with active cholecystitis, include pruritus, skin excoriations, anorexia, weight loss, chills, and fever.
Diagnosis
No test or procedure is in itself diagnostic of gallbladder cancer. However, the following laboratory tests support this diagnosis when they suggest hepatic dysfunction and extrahepatic biliary obstruction:
The following tests help compile data that confirm extrahepatic bile duct cancer:
Treatment

Posted by Ibrahim Hossain at 4:06 PM