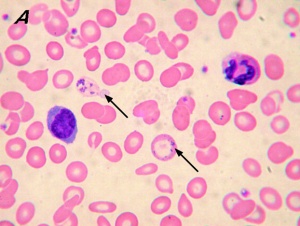 Sideroblastic anemias, a group of heterogenous disorders, produce a common defect—failure to use iron in hemoglobin (Hb) synthesis, despite the availability of adequate iron stores. These anemias may be hereditary or acquired; the acquired form, in turn, can be primary or secondary.
Hereditary sideroblastic anemia often responds to treatment with pyridoxine. Correction of the secondary acquired form depends on the causative disorder; the primary acquired (idiopathic) form, however, resists treatment and usually proves fatal within 10 years after onset of complications or a concomitant disease.

Pathophysiology
Hereditary sideroblastic anemia appears to be transmitted by X-linked inheritance, occurring mostly in young males; females are carriers and usually show no signs of this disorder.
The acquired form may be secondary to ingestion of, or exposure to, toxins, such as alcohol and lead, or to drugs, such as isoniazid and chloramphenicol. It can also occur as a complication of other diseases, such as rheumatoid arthritis, lupus erythematosus, multiple myeloma, tuberculosis, and severe infections.
The primary acquired form, known as refractory anemia with ringed sideroblasts, is most common in elderly people. It’s often associated with thrombocytopenia or leukopenia as part of a myelodysplastic syndrome.
In sideroblastic anemia, normoblasts fail to use iron to synthesize Hb. As a result, iron is deposited in the mitochondria of normoblasts, which are then called ringed sideroblasts.

Sideroblastic anemias usually produce nonspecific clinical effects, which may exist for several years before being identified. Such effects include anorexia, fatigue, weakness, dizziness, pale skin and mucous membranes and, occasionally, enlarged lymph nodes.
Heart and liver failure may develop from excessive iron accumulation in these organs, causing dyspnea, exertional angina, slight jaundice, and hepatosplenomegaly. Hereditary sideroblastic anemia is associated with increased GI absorption of iron, causing signs of hemosiderosis. Additional symptoms in secondary sideroblastic anemia depend on the underlying cause.

Treatment
The underlying cause determines the type of treatment.

Hereditary form
Hereditary sideroblastic anemia usually responds to several weeks of treatment with high doses of pyridoxine (vitamin B6).
Primary acquired form
Elderly patients with sideroblastic anemia—most commonly the primary acquired form—are less likely to improve quickly and are more likely to develop serious complications. Deferoxamine may be used to treat chronic iron overload in selected patients.
Carefully cross-matched transfusions (providing needed Hb) or high doses of androgens are effective palliative measures for some patients with the primary acquired form of sideroblastic anemia. However, this form is essentially refractory to treatment and usually leads to death from acute leukemia or from respiratory or cardiac complications.

Secondary acquired form
The secondary acquired form generally subsides after the causative drug or toxin is removed or the underlying condition is adequately treated. Folic acid supplements may also be beneficial when concomitant megaloblastic nuclear changes in RBC precursors are present.
Posted by Ibrahim Hossain at 1:43 PM

Email ThisBlogThis!Share to TwitterShare to FacebookShare to Pinterest
Labels: Hematology