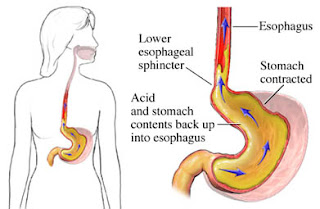 Pathophysiology: Normally when we eat, the food passes from our mouth through the esophagus to the stomach. A ring of muscle fibers in the lower esophagus that make up the lower esophageal sphicture (LES) normally prevent the gastric contents from backing up into the esophagus.
Reflux occurs when LES pressure is deficient or when the pressure within the stomach exceeds LES pressure.

Risk Factors: There are certain situations in which a person may be predisposed to develop GERD. These may include:


Clinical Features: Include:
The symptoms of heart burn or burning sensation in the chest most commonly begins 30-60 minutes after meals and is exacerbated by lying down or bending forward.

Diagnosis: The diagnosis is first made through clinical symptoms and typical history.
1. Upper endoscopy: is done in patients who are not responding to usual treatment , and is needed to rule out dysplasia,  Barett's esophagus or any malignancy.
2. Ambulatory acid (pH) probe tests: uses a device to measure acid for 24 hrs. It helps in identifying how long stomach acid regurgitates into the esophagus.
3. Esophageal manometry is done to measure the pressure of the lower esophageal sphincter.
4. Stool for occult blood can be tested to identify bleeding from irritation in the esophagus or the stomach.

Management:
1. Lifestyle changes: including weight loss in patients who are obese, avoiding smoking and drinking, and drinking plenty of water.
2. Avoid High dose of NSAIDs: avoid asprin, ibuprofen and naproxen and do not use unless necessary.
3. Positional therapy: Patients should avoid sleeping soon after meals and should eat light night snacks. Sleeping with the head end of the bed elevated helps in preventing reflux.
4. Over the counter Antacids: are helpful in reducing the symptoms of heartburn, but the effect is usually short lived.
5. Proton pump inhibitors (e.g Omeprazole) decrease the amount of acid produced in the stomach and is effective in majority of the patients.
6. H2 Receptor blockers ( e.g Ranitidine) also lowers the amount of acid in the stomach and provide relief of symptoms.
7. Surgical intervention may be needed in cases that do not respond to treatment and have developed complications from long standing reflux/
Posted by Ibrahim Hossain at 7:20 PM

Email ThisBlogThis!Share to TwitterShare to FacebookShare to Pinterest
Labels: Gastroenterology