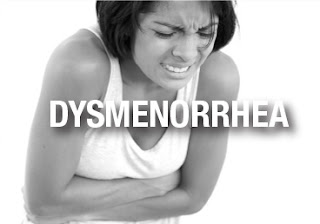 The pain typically begins just after menses and lasts for about 1 to 2 days, but it can also begin 1 to 2 days before the onset of menses and can last up to 4 days into menstruation.

Epidemiology: At least 40% to 60% of adolescent girls suffer some degree of discomfort during menstruation, with about 15% reporting severe symptoms and 14% reporting that they frequently miss school as a result of menstrual symptoms.

Most affected teenage girls have primary dysmenorrhea not associated with pelvic or other pathologic conditions; however, causes of secondary dysmenorrhea always should be considered when the patient is evaluated.

Primary dysmenorrhea: is common menstrual cramps that are recurrent (come back) and are not due to other diseases. Pain usually begins 1 or 2 days before, or when menstrual bleeding starts, and is felt in the lower abdomen, back, or thighs. Pain can range from mild to severe, can typically last 12 to 72 hours.
Pathophysiology: Increased amounts of prostaglandins E2 and F2 in the endometrium of women with
dysmenorrhea lead to smooth muscle contractions along with other symptoms such as vomiting and diarrhea. This biologic explanation correlates with the clinical observation that women who have anovulatory cycles usually do not have dysmenorrhea. Adolescent girls typically develop dysmenorrhea 1 to 2 years after menarche, correlating with the onset of ovulatory cycles.

Approach To A Patient Presenting With Dysmenorrhea: The assessment of a teenager with dysmenorrhea should include the following:
• Complete menstrual history
• Timing of cramps or pain
• Missed school or other activities
• Ability to participate in social events
• Presence of nausea, vomiting, diarrhea, dizziness, or other symptoms
• Medications used, including doses
• Factors that improve or worsen symptoms
• Family history of dysmenorrhea or endometriosis

Ask:
Management: A careful history usually excludes most pathologic causes of dysmenorrhea. Physicians
differ in their opinions regarding what examination is necessary to evaluate a patient with
dysmenorrhea.
In general, for a non–sexually active teenager who has mild to moderate menstrual cramps relieved by nonsteroidal anti-infl ammatory drugs (NSAIDs), only an external genital examination to rule out hymenal abnormalities is indicated. Some physicians would also initiate oral contraceptive pills for a few cycles before performing a pelvic examination if the dysmenorrhea is unresponsive to NSAIDs. For any sexually active teenager or, in the opinion of some experts, for one who is having significant pain that is unresponsive to NSAIDs, a thorough pelvic examination is necessary. In sexually active teenagers, evaluation for sexually transmitted infections and pregnancy should be included.
If a pelvic examination is not possible, then a rectoabdominal examination will provide some useful
information about the presence of masses or adnexal tenderness.
A pelvic ultrasound may be useful in defining uterine and vaginal abnormalities associated with obstruction but is not helpful in the detection of pelvic or abdominal adhesions or endometriosis.

1. Although treatment of primary dysmenorrhea is likely to include drug therapy, the physician also should take the valuable opportunity to teach the patient about her body. Many teenagers do not understand the physiologic mechanisms of menstruation fully.

3. Non-steroidal anti-inflammatory drugs (NSAIDs) are effective in relieving the pain of primary dysmenorrhea.

4. Ibuprofen (200–800 mg every 6–8 hours) is highly effective for dysmenorrhea, as is naproxen sodium (550 mg immediately and then 275 mg every 6–8 hours). Mefenamic acid, an NSAID that blocks the eff ect of prostaglandin at the end-organ level and inhibits its production, can be used in a dose of 500 mg administered immediately, followed by 250 mg every 6 hours. Celecoxib, a cyclooxygenase inhibitor, in a dose of 200 mg every 12 hours, has been shown to be effective as well.

5. These medications are most effective if started at the first sign of menstrual bleeding; women who experience significant nausea with menses may benefit from starting treatment at the earliest symptom of menses, even before bleeding occurs.

6. Some patients (perhaps as many as 20% to 30%) will not respond to these measures. In these young women, a trial of oral contraceptive pills (OCPs) used in the same way as for contraception usually provides relief. OCPs work by suppressing ovulation and decreasing endometrial prostaglandin production. Patients should be told that 2 to 3 cycles may elapse before contraceptives exert their maximal effect. If the patient is sexually active, then oral contraceptives are continued on a routine basis; for the non–sexually active teenager, therapy can be reassessed at 6- to 12-month
intervals.

Secondary Dysmenorrhea: Causes of secondary dysmenorrhea, such as pelvic inflammatory disease (PID), endometriosis, and conditions arising in a variety of other organ systems, can usually be excluded by a careful history and physical examination.
Underlying pathologic conditions should be anticipated in a young woman whose pain begins after 20 years of age, who has a history of surgery related to the genitourinary or gastrointestinal tract, or who has pain that is dull and constant rather than crampy.

Endometriosis is the presence of functional endometrial glands and stroma outside the normal anatomic location in the uterus. Patients who have endometriosis will have failed therapy with NSAIDs and oral contraceptives, and their pain may be acyclic rather than cyclic. Menstrual bleeding may be irregular, gastrointestinal symptoms may be present, and a family history of endometriosis can often be elicited. Endometriosis also may be associated with dyspareunia, tenesmus, and rectal pain.

PID can cause dysmenorrhea acutely, and women often develop chronic pelvic pain as a consequence of PID. Even with assurances of confidentiality, some young women may still not admit to sexual activity. Hence, physicians must maintain a high index of probability if other historical and physical examination findings suggest PID.

Endometrial polyps or fibroids are rare in women younger than 20 years but should be anticipated if the menstrual bleeding is heavy, prolonged, or associated with the passage of clots.

When to Refer: For dysmenorrhea, referral might be appropriate if
• Physician feels uncomfortable prescribing OCPs for the treatment of primary dysmenorrhea
• Patient fails to respond to NSAIDs and OCPs
• Clinical presentation or course suggests that the patient has secondary rather than primary dysmenorrhea
• Patient is sexually active and the physician feels uncomfortable performing a pelvic examination
Posted by Ibrahim Hossain at 10:51 AM