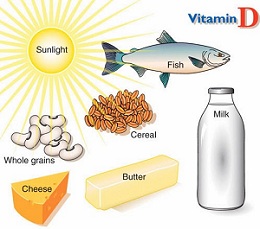 Vitamin D also commonly known as Sunshine vitamin is a fat soluble vitamin and essential to normal body growth and development. It is produced in the body in response to skin being exposed to sunlight. The deficiency of vitamin d may occur due to either inadequate nutritional intake or inadequate sunlight exposure.

1. Lack of consumption of Vitamin D in the diet mostly because of following a strict vegetarian diet.

2. Limited exposure to sunlight by people who are usually home bound or wear long sleeves and robes with head cover due to religious reasons.

4. Decreased ability of kidneys to convert Vitamin d to its active form either due to aging or reduced kidney function due to any kind of renal disease.

6. patients who are obese more frequently have decreased vitamin D levels because vitamin d is extracted from the blood by fat cells.