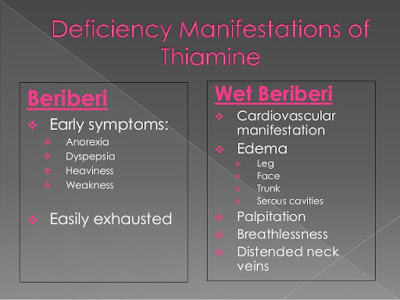 Introduction: Thiamine is important for the metabolism of carbohydrates, especially glucose, and amino acids. It is a water-soluble vitamin found in meat, especially liver, and unrefined cereals and grains.

Thiamine is absorbed readily in the upper small bowel. Increased requirements are seen in pregnancy, lactation, thyrotoxicosis, and fever. Increased losses are seen with diuretic therapy and peritoneal dialysis.

Clinical Features: Thiamine deficiency causes syndromes affecting the cardiovascular and neurologic systems. They are better known by the names beriberi and Wernicke-Korsakoff syndrome. There are two forms of beriberi, wet and dry.

In developed countries, thiamine deficiency is seen mostly in chronic alcoholics. However, it has been reported to occur in others, such as pregnant women with hyperemesis gravidarum on prolonged intravenous fluid therapy, patients on parenteral nutrition, and elderly patients. In alcoholics, thiamine deficiency is due to decreased intake consequent upon a poor diet and also decreased absorption from the intestine.

Neurologic and cardiovascular manifestations are the common presenting symptoms of thiamine deficiency.

Sensorimotor neuropathy, or dry beriberi, is a condition of slow onset. It is usually symmetrical and characterized by loss of ankle jerks and eventually foot drop and wrist drop if the upper limbs are affected.

Wernicke’s encephalopathy is a characterized by increasing confusion, mental dullness, decreasing level of consciousness, ataxia, insomnia, nystagmus, and diploma arising from disturbances of extraocular movement. MRI scanning demonstrates focal lesions in patients with Wernicke’s encephalopathy. Korsakoff’s syndrome is typified by a disproportionate impairment in memory relative to other aspects of cognitive functioning. Short-term memory is usually affected more than long-term memory. Anterograde amnesia often leads to the phenomenon of confabulation.

Diagnosis: A diagnosis of thiamine deficiency can be confirmed by a rapid response to thiamine replacement therapy. Recovery is not always complete and there may be residual neurologic impairment that may be severe. The best laboratory investigation to confirm thiamine deficiency is the measurement of erythrocyte transketolase activity. Transketolase is an enzyme that depends on the thiamine ester thiamine pyrophosphate (TPP). Transketolase activity is measured with and without added TPP. An increase in enzyme activity is called TPP effect. TPP effect of 15% to 25% is borderline deficient and over 25% indicates definite deficiency.

Management: Thiamine replacement therapy in the first instance is obviously important, followed by attention to the underlying cause, such as alcoholism and/or poor diet. The route of thiamine replacement depends on the acuity and severity of the clinical manifestations. Parenteral therapy (100 mg IM or IV) should be used in acute presentations such as Wernicke-Korsakoff syndrome. Oral replacement therapy can be used (200 mg/day).
Posted by Ibrahim Hossain at 8:59 AM