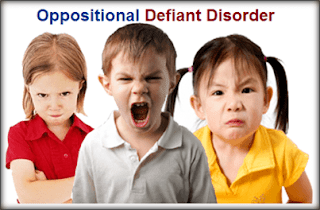 Definition: Oppositional defiant disorder (ODD) is a condition in which a child displays an ongoing pattern of uncooperative, hostile, resistant and an annoying behavior towards people in authority.
In order to be diagnosed the behavior must be present for at least 6 months.

Symptoms: It is difficult to differentiate between a normal but an emotional child with a child with an oppositional defiant disorder. It is not unusual for children to argue, disobey or talk back to their parents, teachers or other adults, but when such a behavior gets too annoying to disrupt the child’s daily life and activities, lasts longer than 6 months and is excessive for the child’s age than it becomes a psychological disorder known as Oppositional defiant disorder.

ODD is characterized by frequent occurrence of at least four of the following behaviors:
Related Mental health issues: A child with oppositional defiant disorder may have associated other mental health issues like anxiety, depression and/or attention deficit hyperactivity disorder. The symptoms of theses conditions may overlap and sometimes it is difficult to diagnose as one particular disorder.

Things to Consider: If a child is suspected to have an abnormal behavior that points toward certain psychological or mental disorder it is important not to neglect it. It is always important to diagnose and treat the condition. Also consider :
Management:

1. Treating Oppositional defiant disorder involves several types of psychotherapy and training the child as well as the parent.

2. Any co-existing conditions like ADHD or other illness should be treated accordingly.

3. Helping the child understand how to manage the anger and express his/her feelings in a more healthier way.

4. Making the child more efficient in communication with the adults and helping the adult members of the family how to understand the child’s feelings and how to respond when he behaves bad or inappropriately.

5. Medicines are not a treatment option as very little research has been done with drugs for this disorder.
Posted by Ibrahim Hossain at 2:26 PM