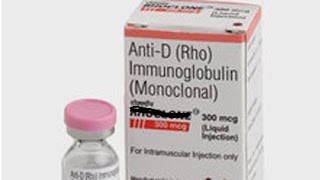 Rho(D) immune globulin is a medication used to prevent Rh isoimmunization in mothers who have a Rh negative blood group.

When a a woman with RhD negative blood is exposed to RhD positive blood in pregnancy she can develops an immune response to it and develop anti D antibodies. In later pregnancies, anti-D antibodies can cross the placenta, causing rhesus haemolytic disease in the Rh positive fetus, and is worsened with subsequent pregnancies.
Rhesus disease can largely be prevented by giving an injection of a medication called anti-D immunoglobulin to the Rh negative mother.
The anti-D immunoglobulin neutralizes any RhD positive antigens that may have entered the mother’s blood during pregnancy. If the antigens have been neutralized, the mother’s blood won't produce antibodies.

It is often given both during and following pregnancy.

Indications
Potential sensitizing events in pregnancy include:
Anti-D Ig is not required for spontaneous miscarriage before 12 weeks of gestation, unless there is instrumentation or medical evacuation of the uterus.

Use of anti-D in pregnancy in Rh–ve mothers
Currently there are two ways to give Anti- D during pregnancy
There doesn't seem to be any difference in the effectiveness between the one-dose or two-dose treatments, and different clinics and doctors follow different protocols.

Postnatal Administration Of  Anti-D immunoglobulin
The Kleihauer test, is a blood test used to measure the amount of fetal hemoglobin transferred from a fetus to a mother's bloodstream and should be done on all eligible patients for Anti D Ig.

500U anti-D can suppress immunization by up to 4 mL of fetal red cells (8 mL of fetal blood), but 1% of women have transplacental haemorrhage (TPH) of >4mL, especially after manual removal of placenta, and with caesarean section. A Kleihauer test is especially important in stillbirth, as massive spontaneous transplacental hemorrhage can be the cause of fetal death. Where >4 mL TPH is suggested by the Kleihauer screen, a formal estimation of the TPH volume is required and 500U anti-D given for every 4mL fetal cells transfused (maximum 5000U anti-D at 2 IM sites/24h).

Mode of Administration:  Anti D Immunoglobulin is given by injection into muscle or a vein. A single dose lasts 2 to 4 weeks. and therefore is needed in each pregnancy.

Posted by Ibrahim Hossain at 1:02 PM