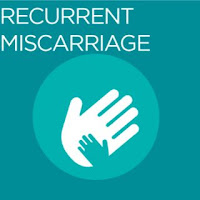 Recurrent miscarriage (RM), which is defined as three or more consecutive miscarriages, is relatively uncommon – affecting about 1 to 2% of couples who conceive.

Three strands of evidence supports that Recurrent Miscarriage is a distinct clinical entity rather than one which occurs purely by chance alone.

Despite major advances in medicine the understanding of the cause of RM is sometimes not clear and even after comprehensive investigation, no cause for pregnancy failure is identified in approximately 50% of couples. This has led to the situation where women with RM have been, and continue to be, subjected to investigations and treatments based on trial and error approach.

Contemporary investigative screen for recurrent miscarriage:
1.Parental structural chromosome abnormality: On the basis of conventional Geisma banding techniques, a parental structural chromosome abnormality is identified in between 3 and 5% of couples with RM.
The most common abnormality is a balanced or reciprocal translocation.
While carriers of a balanced reciprocal translocation are phenotypically normal, abnormal segregation at meiosis leads to between 50 and 70% of their gametes and hence embryos being unbalanced. Twice as many females compared with males are identified as carrying a structural chromosome abnormality.
Until recently, little active treatment could be offered to those with a parental karyotype abnormality other than referral to a genetic counselor for informed advice regarding the prognosis for a future pregnancy. This has changed with the introduction of in vitro fertilization (IVF) and pre-implantation genetic diagnosis (PGD), in which the genetic status of an embryo from a single cell biopsied three days after fertilization is tested.

2. Fetal  Aneuploidy: Aneuploidy (trisomy or monosomy) is the most commonly identified chromosome abnormality in humans and fetal aneuploidy is the single most common cause of miscarriage. Approximately 30%of all miscarriages are trisomic and a further 10% are due to either sex-chromosome monosomy or polyploidy .
The incidence of fetal trisomy rises with increasing age of the mother.

3. Endocrine Abnormalities; Many cases of RM have been thought to be secondary to an underlying endocrine defect.
Interest has traditionally centred on the concept of deficient secretion of progesterone by the corpus luteum leading to early miscarriage. This has come to be termed the luteal phase defect which has been reported to be present in between 23 and 60% of women with RM.
Historically, progestational agents have been used from early post-conception in an attempt to prevent miscarriage.
- Uncontrolled diabetes can be one of the causes of RM.
- Again woman with thyroid auto-antibodies are also prone to RM.
-Insulin resistance has been reported to be associated with a higher rate of miscarriage among women with PCOS. Some studies report that metformin use during pregnancy is associated with a significant reduction in the miscarriage rate among women with PCOS.

Contemporary reproductive criteria for the diagnosis of antiphospholipid syndrome
Women with APS have a miscarriage rate as high as 90% . The majority of miscarriages occur in the first trimester of pregnancy after the establishment of fetal cardiac activity.
Pregnancy failure associated with APS has traditionally been ascribed to thrombosis of the uteroplacental vasculature. Using aspirin in combination with heparin as thromboprophylactic agents reported a significant increase in the live birth rate from 40% with aspirin alone to 70% with aspirin together with heparin in patients with APS.

5. Thrombophilic Defects : Pregnancy is a hypercoaguable state secondary to both an increase in the levels of certain coagulation factors and a simultaneous decrease in both the levels of anticoagulant
proteins and fibrinolysis. Some cases of recurrent miscarriage and later pregnancy complications are due to an exaggerated haemostatic response during pregnancy leading to thrombosis of the uteroplacental vasculature and subsequent fetal demise.

6. Immune dysfunction: Traditionally, pregnancy from an immunological perspective, has been viewed as a conflict between the semiallogenic fetus and the mother in which fetal survival is dependent on suppression of the maternal immune response.
In particular, interest is currently focused on the relationship between Natural Killer (NK) cells and reproductive failure.
Natural Killer cells are lymphocytes which are part of the innate immune system. The NK cells may be divided into those found in peripheral blood and those present in the uterine decidua. There are important phenotypic and functional differences between NKcells present at the two sites. Unlike peripheral blood NK cells, uterine NK cells have little killing ability.
While some have advocated the use of glucocoritcoids as adjuvant therapy in women with raised peripheral NK cell levels, there is no evidence base to support this.

7. Structural uterine abnormalities: The prevalence of uterine anomalies among women with RM has been reported to range between 1.8% and 37.6%. Patients with untreated uterine anomalies experience high rates of miscarriage and preterm delivery.

Management of unexplained recurrent miscarriage
A significant number of couples investigated for recurrent miscarriage will have no cause identified to account for their pregnancy losses. This is a really frustrating situation for both patient and the clinician.
Posted by Ibrahim Hossain at 2:05 PM