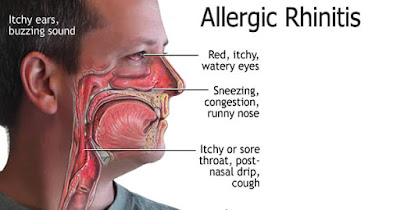 Inroduction: Allergic rhinitis, also known as hay fever, is a type of inflammation in the nose which occurs when the immune system  overreacts to allergens in the air.
Depending on the allergen, the resulting rhinitis and conjunctivitis may be seasonal (hay fever) or year-round (perennial allergic rhinitis). Allergic rhinitis is the most common atopic allergic reaction, affecting over 20 million Americans.

Clinical Features:
With seasonal allergic rhinitis, the key signs and symptoms are paroxysmal sneezing, profuse watery rhinorrhea, nasal obstruction or congestion, and pruritus of the nose and eyes, usually accompanied by pale, cyanotic, edematous nasal mucosa; red and edematous eyelids and conjunctivae; excessive lacrimation; and headache or sinus pain. Some patients also complain of itching in the throat and malaise.
With perennial allergic rhinitis, conjunctivitis and other extranasal effects are rare, but chronic nasal obstruction is common and often extends to eustachian tube obstruction, particularly in children.
With both types of allergic rhinitis, dark circles may appear under the patient's eyes because of venous congestion in the maxillary sinuses. The severity of signs and symptoms may vary from season to season and from year to year.
Some patients may develop chronic complications, including sinusitis and nasal polyps.
Diagnosis: Microscopic examination of sputum and nasal secretions reveals large numbers of eosinophils. Blood chemistry studies show normal or elevated IgE levels, possibly linked to seasonal overproduction of interleukin-4 and -5 (involved in the allergic inflammatory process). A firm diagnosis rests on the patient's personal and family history of allergies and on physical findings during a symptomatic phase. Skin testing, paired with tested responses to environmental stimuli, can help pinpoint the responsible allergens when interpreted in light of the patient's history.

Differential Diagnosis: To distinguish between allergic rhinitis and other disorders of the nasal mucosa, remember these differences:

With chronic vasomotor rhinitis, eye symptoms are absent, rhinorrhea is mucoid, and seasonal variation is absent.

With rhinitis medicamentosa, which results from excessive use of nasal sprays or drops, nasal drainage and mucosal redness and swelling disappear when such medication is withheld.

In children, a differential diagnosis should rule out the presence of a foreign body in the nasal passage, such as a bean or a button.

Treatment
1. Symptoms may be prevented by eliminating the environmental antigen, if possible, and by obtaining drug therapy and immunotherapy.
2. Antihistamines and nasal decongestants are useful for treating acute symptoms. Although these drugs block histamine effects, they do have some adverse anticholinergic effects (sedation, dry mouth, nausea, dizziness, blurred vision, and nervousness).
3. Newer antihistamines, such as cetirizine and loratadine, have proved effective in clinical trials.
4.  Fexofenadine may be effective but with less sedation and a lower risk of cardiac arrhythmias.
5. Inhaled intranasal steroids produce local anti-inflammatory effects with minimal adverse systemic effects. The most commonly used intranasal steroids are flunisolide and beclomethasone. These drugs usually aren't effective for acute exacerbations, but they can help control chronic symptoms.
Advise the patient to use intranasal steroids regularly, as prescribed, for optimal effectiveness.
6. Cromolyn sodium may be helpful in preventing allergic rhinitis; however, this drug may take up to 4 weeks to produce a satisfactory effect and must be taken regularly during allergy season.
7. Long-term management includes immunotherapy or desensitization with injections of extracted allergens administered before or during allergy season or perennially. Seasonal allergies require particularly close dosage regulation.
8. Local nasal immunotherapy is also being studied.
Special considerations
Posted by Ibrahim Hossain at 1:59 PM