Postpartum Depression And How To Manage It 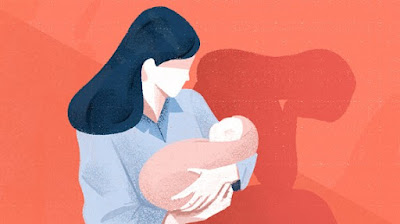 It is quiet common for the new mother to feel sad, worried, tired or fatigued. As many as 80 out of 100 mothers go through such feelings for a week or two after the birth of the baby. It is completely normal and they start to feel better and normal after a few weeks..

Postpartum depression is diagnosed when these symptoms are much severe and lasts longer. It can cause severe mood swings, and a mix of physical, emotional and behavioral changes.

The symptoms usually begins within the first few weeks after giving birth but sometimes may even begin earlier while being pregnant or later up to a year after birth.

Suffering from postpartum depression does not mean that a mother does not love her baby or that she is a bad mother. It is just that she is suffering from a medical condition and needs counselling therapy and treatment.

Symptoms may vary among different woman but a list of common symptoms include:

-Lack of interest in daily activities

- Not able to think or make proper decisions.

- Feeling difficult to bond with the baby.

- No interest in friends and family,

What causes Postpartum Depression: Female body produces a lot of hormones during pregnancy but soon after delivery there is a sudden decrease of these hormones which causes changes in the chemical system of the brain leading to depression.

Depending on the severity and the type it can be treated with psychotherapy or antidepressant medications.

It is important to seek medical help if symptoms of depression lasts longer than 2 weeks within 1 year of giving birth.

-Get Support from friends and family.

-Be open about your feelings and discuss it with your partner and your family.

-Antidepressants may be prescribed to you by your doctor but they usually take 6-8 weeks to show improvement in symptoms.

Posted by Ibrahim Hossain at 7:53 PM No comments: 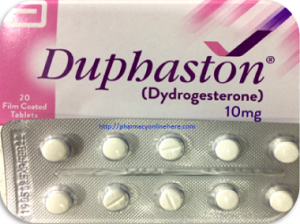 Duphaston should only be taken upon prescription from your doctor. Different indications need different dosing and duration of treatment.

For hormone replacement therapy(Usually Given in post menopausal woman): In combination with continuous oestrogen therapy, take one tablet daily for 14 consecutive days of a 28 day cycle.

Dysmenorrhoea (painful menstruation): Take one tablet twice daily from day 5 to day 25 of the cycle.

Endometriosis (abnormal growth of uterine tissues outside the uterus): Take one tablet two or three times daily from day 5 to day 25 of the cycle or continuously (as prescribed by the doctor).

Dysfunctional bleeding (to prevent bleeding): Take one tablet twice daily from day 11 to day 25 of the cycle.

Premenstrual syndrome: Take one tablet twice daily from day 11 to day 25 of the cycle.

Irregular cycles: Take one tablet twice daily from day 11 to day 25 of the cycle.

Threatened abortion(history of bleeding or spotting in early pregnancy): Take four tablets at once, then one tablet every eight hours until symptoms subside.

Habitual abortion(history of repeated miscarriages): Take one tablet twice daily until the twentieth week of pregnancy.

Infertility due to luteal (yellow body) insufficiency (Deficiency of natural production of progesterone hormone): Take one tablet daily from day 14 to 25 of the cycle. Continue the treatment for at least six consecutive cycles. In addition, it is advisable to continue treatment for the first few months of pregnancy as described under "Habitual abortion". If the patient is uncertain about how long to continue the treatment, talk to the doctor.

Luteal support as part of an Assisted Reproductive Technology (ART) treatment: Take one tablet three times daily (30mg daily) starting at the day of oocyte retrieval and continuing for 10 weeks if pregnancy is confirmed.

Side Effects: Duphaston is considered one of the safe drugs with minimal side effects. Some adverse effects observed are

Contraindicated to be used when any history of allergy to the medicine and should be avoided when breastfeeding.

Posted by Ibrahim Hossain at 10:01 PM No comments: 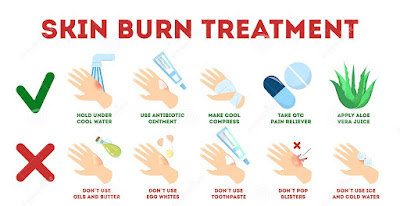 Minor burns can occur anytime while working in the kitchen or accidents can happen with young kids. Immediate first aid management of burns is important to know .

First degree minor burns are usually not life threatening but are very painful and may even leave a scar if not properly treated.

The skin is red and painful and there may be some swelling.

1. First of all remove the victim and move to a safe place to avoid further burning.

2. Cool the hot burned skin under cool running water or immerse in cool water for sometime , this helps to relieve the pain.

3. Apply a moisturizing lotion like the one with aleo vera.

4. You can apply petroleum jelly 2-3 times a day. Avoid putting butter, too much of oil or lotions with fragrances which may cause an infection.

5. Cover the burned skin with a sterile non sticking bandage .

6. If blisters form never pop them up.

7. Take an over the counter pain killer like paracetamol or ibuprofen.

9 If any signs of infection antibiotics may be needed

Posted by Ibrahim Hossain at 9:29 PM No comments:

Positioning A Baby While Breast Feeding 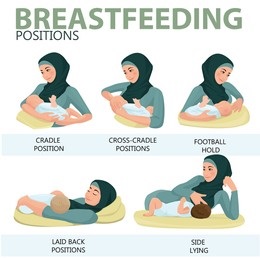 Breastfeeding your baby is always encouraged but at times new mothers find it difficult and face a lot of problems which in the end results in giving up and switching to formula.

Proper positioning the baby is very important for breastfeeding and to prevent problems later on.

How to position a baby while breast feeding  depends on the choice and comfort of both mother and baby. No matter which position is used it is important to make sure that

While Breast feeding it is very important that

-Mother is comfortable and relaxed.

She should know and learn how to support the breast while feeding. Baby’s lips should be first touched with the nipple and then wait for the baby to widely open the mouth so that nipple along with areola goes in and baby starts sucking.

1.   Cradle Position: The mother cradles the baby in her arm. The baby should be held close to the mother’s body, with the forearm supporting the baby’ head. For mother’s comfort she may want to support the cradling arm with a pillow or her other arm.

2.   Cross Cradle: The mother cradles the baby in her arm. Her hand is supporting the baby’s head and neck.

4.   Side lying position: Mother is lying on her side and baby lies on its side facing the mother. Mother supports the baby’s head and neck with her hand or a pillow.

5.   Supine Position: The mother is lying on her back with the baby lying face down on the mother’s chest. Mother’s hand supports the baby’s head on her breast. This position is useful immediately after a c section.

Posted by Ibrahim Hossain at 12:43 PM No comments: 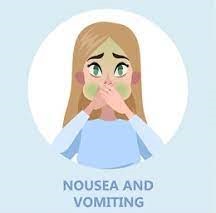 Can be simply described as an uncomfortable feeling or a sensation of sickness which may or may not be followed by vomiting.

Is an effortless regurgitation of  stomach contents.

Nausea and vomiting is caused by a wide variety of conditions which stimulate the vomiting receptors in the brain.

A detailed history helps to identify the underlying cause.

-         Sudden onset of vomiting without any associated pain may suggest food poisoning, infectious gastroenteritis or use of any dugs

-         Vomiting along with abdominal pain may be caused by acute abdominal conditions like appendicitis, acute gastritis or intestinal obstruction.

-         Migraine headaches are commonly associated with nausea and sometimes vomiting too.

Laboratory tests that should be done include

Imaging Studies that can help find out the cause include

Medications that help includes different antiemetic medicines which are given to control vomiting.

For mild, self limited acute vomiting no treatment is needed , just give clear fluids and soft easily digestible small quantities of food.

In cases of severe vomiting IV fluids are needed to correct and prevent dehydration.

Posted by Ibrahim Hossain at 12:08 PM No comments:

Email ThisBlogThis!Share to TwitterShare to FacebookShare to Pinterest
Labels: Gastroenterology

Ectopic Pregnancy - Pregnancy Which Occurs Outside The Uterus 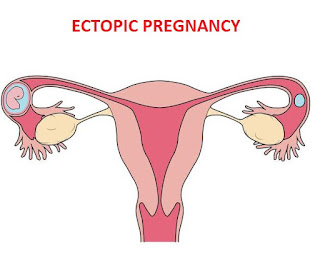 cavity, the commonest site being the fallopian

tube. It may also occur, although  rare, in:

Why Does Ectopic Pregnancy Occur

The ovum is fertilized in the fallopian tube and reaches the uterus in about five days. Anything that delays the passage of the fertilized ovum to the uterus can result in tubal pregnancy, such as

The picture of ectopic pregnancy is:

Vaginal bleeding The bleeding is usually scanty, less than a normal period and dark brown in colour.

Faintness or even shock with an acute rupture.

Ultrasound is helpful. While it may not always show the embryo or its sac in the tube, findings may include:

• an empty uterus with thickened decidua;

• fluid (blood) in the pouch of Douglas;

• a multi-echo mass in the region of the tube.

Progesterone levels are commonly low because the pregnancy is failing.

Serum bhCG is usually lower than expected for gestation and on serial measurements increases by less than 60% over 48 hours.

The diagnosis is from any other acute abdominal conditions such as rupture of a viscus or acute peritonitis. The clinical picture is so typical that in most cases diagnosis presents no difficulty. Other diagnoses which may confuse are:

• bleeding with an ovarian cyst;

The treatment of tubal pregnancy is removal of the pregnancy and sometimes the affected tube by laparoscopy or laparotomy. If the tube is patent and not seriously damaged, it may be possible to conserve it and thus leave the woman with a chance of conception later in life.

• kill the embryo with a direct injection of methotrexate or mifepristone allowing absorption so requiring no surgery on the tube;

• incise the swollen tube over the ectopic pregnancy, aspirate the embryo, and achieve haemostasis (salpingostomy).

In a case of severe haemorrhage, the patient must be taken immediately to the operating theatre.

Little time should be wasted in attempting resuscitation which can prove useless and may only increase bleeding.

An intravenous drip should be set up and a blood transfusion given as soon as possible.

In most cases the affected tube should be removed;

an exception may be made if the woman

desires children and the other tube is already missing

or seriously diseased. The disadvantage of conservation

is the increased risk of recurrence of

• Medical treatment with methotrexate can be used if the hCG level is less than 5000 iu/l and the ectopic mass is less than 4 cm in diameter on ultrasound scan. There should be no symptoms or signs of rupture.

Posted by Ibrahim Hossain at 3:54 AM No comments:

Gastritis - Inflammation Of The Stomach Lining

Simply defined as inflammation of the gastric mucosa.

It may occur as an Acute gastritis when symptoms appear within a few days or it may be chronic when it is present for a long time.

-         -Mild epigastric tenderness on palpation which may or may not be present.

Workup to look for the presence of H pylori, and treat if present.

Posted by Ibrahim Hossain at 3:41 AM No comments: