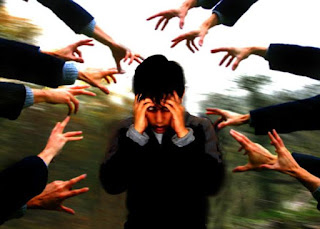 While dealing with psychiatry patients it is important to understand what having odd ideas mean and to  decide if a patient has delusions, hallucinations or a major thought disorder , because if present the helps in making a proper diagnosis and then a good treatment plan.

Patients may be reluctant to reveal odd ideas.
Ask gently:
“Have you ever had any thoughts which might now seem odd; perhaps that there is a conspiracy
against you, or that you are controlled by outside voices or the radio?”

Hallucination: is defined as a perception in the absence of external stimulus and these may be visual, auditory, tactile etc involving almost any of the five senses.
There are many different causes. It could be due to a mental illness like in schizophrenia or a nervous system disorder like Parkinson's disease. Tactile or visual hallucinations (without auditory hallucinations) suggest an organic disorder (e.g alcohol withdrawal).

A pseudo-hallucination is one in which the person knows the stimulus is in the mind (e.g a voice heard within him- or herself, rather than over the left shoulder). They are more common, and does not indicate a mental illness, but they may be a sign that a genuine hallucination is waning.

Few treatments are available for hallucinations. However, for those hallucinations caused by mental disease, a psychologist or psychiatrist should treat the underlying medical illness.

Delusions are firm beliefs that do not change, even when a person is presented with conflicting evidence. If the belief arrives fully formed, and with no antecedent events or experiences to account for it, it is said to be primary, and is suggestive of schizophrenia

Delusions are considered "bizarre" if they are clearly implausible and peers within the same culture cannot understand them. An example of a bizarre delusion is when an individual believes that his or her organs have been replaced with someone else's without leaving any wounds or scars. An example of a nonbizarre delusion is the belief that one is under police surveillance, despite a lack of evidence.

A careful history will some times reveal that delusions are secondary—e.g a person who is psychotically depressed may come to think of himself as being literally worthless.

There are several different types of delusional disorders, and each type captures a particular theme within a person's delusions. A few examples are given below:

Posted by Ibrahim Hossain at 7:10 PM