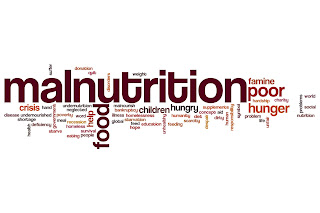 Both outpatients and inpatients are at risk for malnutrition if they meet one or more of the following criteria:
• Unintentional loss of >10% of usual body weight in the preceding 3 months
• Body weight <90% of ideal for height.
• Body mass index (BMI: weight/height2 in kg/m2) <18.5

Two forms of severe malnutrition can be seen:

Email ThisBlogThis!Share to TwitterShare to FacebookShare to Pinterest
Labels: Nutrition