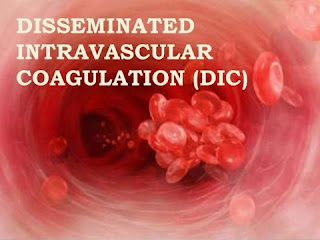 Introduction
Also called consumption coagulopathy and defibrination syndrome, disseminated intravascular coagulation (DIC) occurs as a complication of diseases and conditions that accelerate clotting. This accelerated clotting process causes small blood vessel occlusion, organ necrosis, depletion of circulating clotting factors and platelets, and activation of the fibrinolytic system—which, in turn, can provoke severe hemorrhage.
Clotting in the microcirculation usually affects the kidneys and extremities but may occur in the brain, lungs, pituitary and adrenal glands, and GI mucosa. Other conditions, such as vitamin K deficiency, hepatic disease, and anticoagulant therapy, may cause a similar hemorrhage.
DIC is generally an acute condition but may be chronic in cancer patients. The prognosis depends on early detection and treatment, the severity of the hemorrhage, and treatment of the underlying disease or condition.

Etiology
DIC may result from:
Other causes include heatstroke, shock, poisonous snakebite, cirrhosis, fat embolism, incompatible blood transfusion, cardiac arrest, surgery necessitating cardiopulmonary bypass, giant hemangioma, severe venous thrombosis, and purpura fulminans.
It isn’t clear why such disorders lead to DIC; nor is it certain that they lead to it through a common mechanism. In many patients, the triggering mechanisms may be the entrance of foreign protein into the circulation and vascular endothelial injury.

The hemorrhage that occurs may largely be the result of the anticoagulant activity of fibrin degradation products as well as depletion of plasma coagulation factors.

Clinical Manifestations
The most significant sign of DIC is abnormal bleeding, without an accompanying history of a serious hemorrhagic disorder.
Principal signs of such bleeding include cutaneous oozing, petechiae, ecchymoses, and hematomas caused by bleeding into the skin. Bleeding from sites of surgical or invasive procedures (such as incisions or I.V. sites) and from the GI tract are equally significant indications, as are acrocyanosis and signs of acute tubular necrosis.
Related symptoms and other possible effects include nausea, vomiting, dyspnea, oliguria, seizures, coma, shock, failure of major organ systems, and severe muscle, back, and abdominal pain.

Diagnosis
Abnormal bleeding in the absence of a known hematologic disorder suggests DIC. Initial laboratory findings supporting a tentative diagnosis of DIC include:
Other supportive data include positive fibrin monomers, diminished levels of factors V and VIII, fragmentation of red blood cells (RBCs), and decreased hemoglobin (less than 10 g/dl). Assessment of renal status demonstrates a reduction in urine output (less than 30 ml/hour) and elevated blood urea nitrogen (greater than 25 mg/dl) and serum creatinine (greater than 1.3 mg/dl) levels.
Final confirmation of the diagnosis may be difficult because many of these test results also occur in other disorders (primary fibrinolysis, for example). Additional diagnostic measures determine the underlying disorder.

Management
Successful management of DIC necessitates prompt recognition and adequate treatment of the underlying cause. Treatment may be supportive (when the underlying disorder is self-limiting, for example) or highly specific.
If the patient isn’t actively bleeding, supportive care alone may reverse DIC. However, active bleeding may require I.V. heparin and administration of blood, fresh frozen plasma, platelets, or packed RBCs to support hemostasis.

Posted by Ibrahim Hossain at 3:40 PM