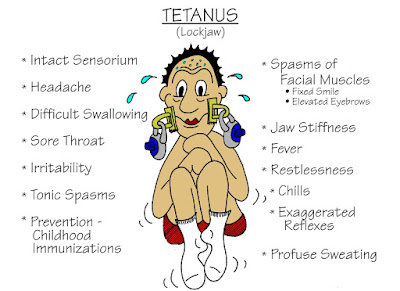 Introduction: Tetanus, also known as lockjaw, is an acute exotoxin-mediated infection caused by the anaerobic, spore-forming, gram-positive bacillus Clostridium tetani. Usually, such infection is systemic; less often, localized.
Tetanus is fatal in up to 60% of non immunized persons, usually within 10 days of onset. When symptoms develop within 3 days after exposure, the prognosis is poor.

Etiology: Normally, transmission is through a puncture wound that is contaminated by soil, dust, or animal excreta containing C. tetani, or by way of burns and minor wounds. After C. tetani enters the body, it causes local infection and tissue necrosis. It also produces toxins that then enter the bloodstream and lymphatics and eventually spread to central nervous system tissue.
Tetanus occurs worldwide, but it’s more prevalent in agricultural regions and developing countries that lack mass immunization programs. It’s one of the most common causes of neonatal deaths in developing countries, where neonates of unimmunized mothers are delivered under unsterile conditions. In such neonates, the unhealed umbilical cord is the portal of entry.
In America, about 75% of all cases occur between April and September.

Clinical Features:
The incubation period varies from 3 to 4 weeks in mild tetanus to less than 2 days in severe tetanus. When symptoms occur within 3 days after injury, death is more likely. If tetanus remains localized, signs of onset are spasm and increased muscle tone near the wound.
If tetanus is generalized (systemic), indications include
Despite such pronounced neuromuscular symptoms, cerebral and sensory functions remain normal.

Complications include
Neonatal tetanus is always generalized. The first clinical sign is difficulty in sucking, which usually appears 3 to 10 days after birth. It progresses to total inability to suck, with excessive crying, irritability, and nuchal rigidity.

Diagnosis
Frequently, diagnosis must rest on clinical features and a history of trauma and no previous tetanus immunization. Blood cultures and tetanus antibody tests are often negative; only one-third of patients have a positive wound culture. Cerebrospinal fluid pressure may rise above normal. Diagnosis also must rule out meningitis, rabies, phenothiazine or strychnine toxicity, and other conditions that mimic tetanus.

Treatment
Within 72 hours after a puncture wound, a patient with no previous history of tetanus immunization first requires tetanus immune globulin (TIG) or tetanus antitoxin to confer temporary protection. Next, he needs active immunization with tetanus toxoid. (A patient who hasn’t received tetanus immunization within 5 years needs a booster injection of tetanus toxoid.) He’ll also have to undergo debridement to ensure that the source of the toxin has been removed.
If tetanus develops despite immediate post injury treatment, the patient will require airway maintenance and a muscle relaxant such as diazepam to decrease muscle rigidity and spasm. If muscle contractions aren’t relieved by muscle relaxants, a neuromuscular blocker may be needed. The patient with tetanus needs high-dose antibiotics (penicillin administered I.V. or an alternative).
Posted by Ibrahim Hossain at 4:58 PM