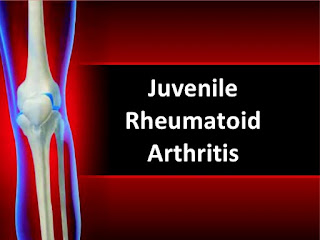 Affecting children younger than age 16, juvenile rheumatoid arthritis (JRA), also known as juvenile chronic arthritis, is an immune-mediated inflammatory disorder of the connective tissues characterized by joint swelling and pain or tenderness. It may also involve such organs as the skin, heart, lungs, liver, spleen, and eyes, producing extra-articular signs and symptoms.
JRA has three major types: systemic (Still’s disease or acute febrile type), polyarticular, and pauciarticular. Depending on the type, this disease can occur as early as age 6 weeks—although rarely before 6 months—with peaks of onset between ages 1 and 3 and 8 and 12. It’s considered the major chronic rheumatic disorder of childhood; overall incidence is twice as high in girls, with variation among the types.

Causes
JRA is thought to be an autoimmune disorder. Research has linked causation to genetic and immune factors. Viral or bacterial (particularly streptococcal) infection, trauma, and emotional stress have been identified as precipitating factors.

Systemic JRA
Affecting boys and girls almost equally, systemic JRA accounts for 20% to 30% of cases. Affected children may have mild, transient arthritis or frank poly-arthritis associated with fever and rash.
Fever in systemic JRA occurs suddenly and spikes to 103° F (39.4° C) or higher once or twice daily, usually in the late afternoon, then rapidly returns to normal or subnormal. (This sawtooth, or intermittent spiking, fever pattern helps differentiate JRA from other inflammatory disorders.) When fever spikes, an evanescent rheumatoid rash typically appears, consisting of small, pale or salmon pink macules, most commonly on the trunk and proximal extremities and occasionally on the face, palms, and soles.
Massaging or applying heat intensifies this rash, which is usually most conspicuous where the skin has been rubbed or subjected to pressure, such as that from underclothing.
Other signs and symptoms of systemic JRA include hepatosplenomegaly, lymphadenopathy, pleuritis, pericarditis, myocarditis, and nonspecific abdominal pain.

Polyarticular JRA
Polyarticular JRA is four to nine times more common in girls than in boys and may be seronegative or seropositive for rheumatoid factor (RF). It involves five or more joints and usually develops insidiously. The joints most commonly involved are the wrists, elbows, knees, ankles, and small joints of the hands and feet.
Polyarticular JRA can also affect larger joints, including the temporomandibular joints and those of the cervical spine, hips, and shoulders. These joints become swollen, tender, and stiff.
Usually, the arthritis is symmetrical; it may be remittent or indolent. The patient may run a low-grade fever with daily peaks. Listlessness and weight loss can occur, possibly with lymphaden-opathy and hepatosplenomegaly. Other signs of polyarticular JRA include subcutaneous nodules on the elbows or heels and noticeable developmental retardation.
Seropositive polyarticular JRA, the more severe type, usually occurs late in childhood and can cause destructive arthritis that mimics adult RA.

Pauciarticular JRA
Involving few joints (usually no more than four), pauciarticular JRA usually affects the knees and other large joints. It accounts for 45% of cases. Three major subtypes exist:
Pauciarticular JRA with chronic iridocyclitis most commonly affects girls younger than age 6 and involves the knees, elbows, ankles, or iris. Inflammation of the iris and ciliary body is typically asymptomatic, but may produce pain, redness, blurred vision, and photophobia. Young girls who test positive for antinuclear antibodies (ANAs) are at highest risk for eye complications.
Pauciarticular JRA with sacroiliitis usually affects boys (9:1) older than age 8, who tend to be human leukocyte antigen (HLA)-B27–positive. This subtype is characterized by lower-extremity arthritis that produces hip, sacroiliac, heel, and foot pain and Achilles tendinitis. These patients may later develop the sacroiliac and lumbar arthritis characteristic of ankylosing spondylitis. Some patients also experience acute iritis, but not as many as those with the first subtype.
The third subtype includes patients with joint involvement who test negative for ANAs and HLA-B27 and who don’t develop iritis. Characterized by asymmetrical involvement of large or small joints, this subtype can strike at any age during childhood. These patients have a better prognosis than those with the first or second subtype, although some may progress to polyarticular disease.
Common to all types of JRA is joint stiffness in the morning or after periods of inactivity. Growth disturbances may also occur, resulting in overgrowth or undergrowth adjacent to inflamed joints.

Diagnosis
Persistent joint pain, rash, and fever clearly point to JRA. Laboratory tests are useful for ruling out other inflammatory or even malignant diseases that can mimic JRA and for monitoring disease activity and response to therapy.
Treatment
Successful management of JRA usually involves administration of an anti-inflammatory, physical therapy, carefully planned nutrition and exercise, and regular eye examinations. The child and his parents must be involved in therapy.
A nonsteroidal anti-inflammatory drug (NSAID)—such as aspirin, ibuprofen, or naproxen—is used to reduce pain and swelling. If this proves ineffective, a disease-modifying antirheumatic drug (DMARD), such as methotrexate, is a useful second-line agent. In addition, gold salts, hydroxychloroquine, auranofin, aurothioglucose, etanercept, or sulfasalazine may be considered. Responses to individual drugs may differ among the various subtypes of JRA. Because of adverse effects, systemic steroids are generally reserved for treatment of systemic complications that are resistant to NSAIDs and DMARDS, such as pericarditis and iritis. However, an intra-articular steroid can be effective in managing pauciarticular and polyarticular JRA.

Posted by Ibrahim Hossain at 3:55 PM

Email ThisBlogThis!Share to TwitterShare to FacebookShare to Pinterest
Labels: Pediatrics