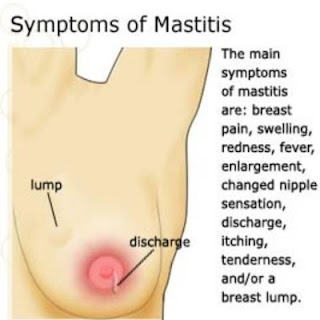 Mastitis (parenchymatous inflammation of the mammary glands) and breast engorgement (congestion) are disorders that may affect lactating females.

Mastitis occurs postpartum in about 1% of patients, mainly in primiparas who are breast-feeding. It occurs occasionally in nonlactating females and rarely in males. All breast-feeding mothers develop some degree of engorgement, but it’s especially likely to be severe in primiparas. The prognosis for both disorders is good.

Causes
Mastitis develops when a pathogen that typically originates in the nursing infant’s nose or pharynx invades breast tissue through a fissured or cracked nipple and disrupts normal lactation. The most common pathogen of this type is Staphylococcus aureus; less commonly, it’s Staphylococcus epidermidis or beta-hemolytic streptococci. Rarely, mastitis may result from disseminated tuberculosis or the mumps virus. Predisposing factors include a fissure or abrasion on the nipple; blocked milk ducts; and an incomplete let-down reflex, usually due to emotional trauma. Blocked milk ducts can result from a tight bra or prolonged intervals between breast-feedings.
Causes of breast engorgement include venous and lymphatic stasis and alveolar milk accumulation.

Signs and symptoms
Mastitis may develop anytime during lactation but usually begins 3 to 4 weeks postpartum with fever (101° F [38.3° C] or higher in those with acute mastitis), malaise, and flulike symptoms. The breasts (or, occasionally, one breast) become tender, hard, swollen, and warm. Unless mastitis is treated adequately, it may progress to breast abscess.
Breast engorgement generally starts with onset of lactation (day 2 to day 5 postpartum). The breasts undergo changes similar to those in mastitis, and body temperature may be elevated. Engorgement may be mild, causing only slight discomfort, or severe, causing considerable pain. A severely engorged breast can interfere with the infant’s capacity to feed because of his inability to position his mouth properly on the swollen, rigid breast.

Treatment
Antibiotic therapy, the primary treatment for mastitis, generally consists of penicillin G to combat staphylococcus; erythromycin or kanamycin is used for penicillin-resistant strains. Although symptoms usually subside 2 to 3 days after treatment begins, antibiotic therapy should continue for 10 days. Other appropriate measures include an analgesic for pain and, rarely, when antibiotics fail to control the infection and mastitis progresses to breast abscess, incision and drainage of the abscess.
The goal of treatment of breast engorgement is to relieve discomfort and control swelling, and may include an analgesic to alleviate pain, and ice packs and an uplift support bra to minimize edema. Rarely, oxytocin nasal spray may be necessary to release milk from the alveoli into the ducts. To facilitate breast-feeding, the mother may manually express excess milk before a feeding so the infant can grasp the nipple properly
Posted by Ibrahim Hossain at 1:37 PM