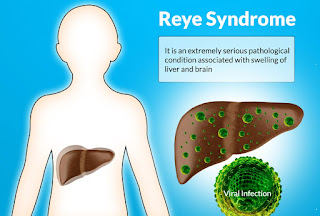 Incidence
Reye’s syndrome affects children. It’s most common in patients ages 4 to 12, with a peak incidence at age 6.

Pathophysiology
Incidence of Reye’s syndrome usually rises during influenza outbreaks and is linked to aspirin use. It almost always follows within 1 to 3 days of an acute viral infection, such as an upper respiratory tract infection, type B influenza, or varicella (chickenpox).
With Reye’s syndrome, damaged hepatic mitochondria disrupt the urea cycle, which normally changes ammonia to urea for its excretion from the body. This results in hyperammonemia, hypoglycemia, and an increase in serum short-chain fatty acids, leading to encephalopathy.Simultaneously, fatty infiltration is found in renal tubular cells, neuronal tissue, and muscle tissue, including the heart.

Treatment
Reye's syndrome is usually treated in the hospital. Severe cases may be treated in the intensive care unit. It is important to closely monitor the child's blood pressure and other vital signs. Specific treatment may include:
In Serious cases if the child has trouble breathing, he or she may need assistance from a breathing machine (ventilator).

Prognosis
The prognosis depends on the severity of central nervous system depression. Previously, mortality was as high as 90%. Today, ICP monitoring and, consequently, early treatment of increased ICP, along with other treatment measures, have cut mortality to about 20%. Death is usually a result of cerebral edema or respiratory arrest. Comatose patients who survive may have residual brain damage.
Posted by Ibrahim Hossain at 12:37 PM

Email ThisBlogThis!Share to TwitterShare to FacebookShare to Pinterest
Labels: Pediatrics