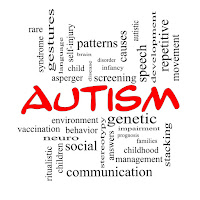 A severe, pervasive developmental disorder, autistic disorder is marked by unresponsiveness to social contact, gross deficits in intelligence and language development, ritualistic and compulsive behaviors, restricted capacity for developmentally appropriate activities and interests, and bizarre responses to the environment. Autistic disorder may be complicated by epileptic seizures, depression and, during periods of stress, catatonic phenomena.

Age of Presentation
Autism usually becomes apparent before the child reaches age 30 months, but in some children, the actual onset is difficult to determine. Occasionally, autistic disorder isn’t recognized until the child enters school. It affects three to four times more boys than girls, usually the firstborn boy. The prognosis is poor; most patients require a structured environment throughout life.

Causes
Autistic disorder is thought to result from a combination of psychological, physiologic, and sociological factors. The parents of an autistic child may appear distant and unaffectionate. However, because autistic children are unresponsive or respond with rigid, screaming resistance to touch and attention, parental remoteness may be merely a frustrated, helpless reaction to this disorder, not its cause.
Some autistic children show abnormal but nonspecific EEG findings that suggest brain dysfunction, possibly resulting from trauma, disease, or a structural abnormality. Autistic disorder also has been associated with maternal rubella, untreated phenylketonuria, tuberous sclerosis, anoxia during birth, encephalitis, infantile spasms, and fragile syndrome X.

Unresponsiveness to people
Infants with this disorder avoid eye contact, have little or no facial expression, and are indifferent to affection and physical contact. Parents may report that the child becomes rigid or flaccid when held, cries when touched, and shows little or no interest in human contact.
As the infant grows older, his smiling response is delayed or absent. He doesn’t lift his arms in anticipation of being picked up or form an attachment to a specific caregiver. Nor does he show the anxiety about strangers that’s typical in the 8-month-old infant.
The autistic child fails to learn the usual socialization games (peek-a-boo, pat-a-cake, or bye-bye). He’s likely to relate to others only to fill a physical need and then without eye contact or speech. The end result may be mutual withdrawal between parents and child.

Severe language impairment
The child may be mute or may use immature speech patterns. For example, he may use a single word to express a series of activities; he may say “ground” when referring to any step in using a playground slide.
His speech commonly shows echolalia (meaningless repetition of words or phrases addressed to him) and pronoun reversal (“you go walk” when he means “I want to go for a walk”). When answering a question, he may simply repeat the question to mean yes and remain silent to mean no.

Lack of imaginative play
The child shows little imagination, seldom acting out adult roles or engaging in fantasy play. In fact, he may insist on lining up an exact number of toys in the same manner over and over or repetitively mimic the actions of someone else.

Bizarre behavior
The autistic child shows characteristically bizarre behavior patterns, such as screaming fits, rituals, rhythmic rocking, arm flapping, crying without tears, and disturbed sleeping and eating patterns. His behavior may be self-destructive (hand biting, eye gouging, hair pulling, or head banging) or self-stimulating (playing with his own saliva, stool, and urine).
His bizarre responses to his environment include an extreme compulsion for sameness.

Abnormal response to sensory stimuli
The autistic child may under react or overreact to sensory stimuli; he may ignore objects—dropping those he’s given or not looking at them—or he may become excessively absorbed in them—continually watching the objects or the movement of his own fingers over the objects. He commonly responds to stimuli by head banging, rocking, whirling, and hand flapping. He tends to avoid using sight and hearing to interact with the environment.

Other behavioral abnormalities
Other characteristics of an autistic child include:
Treatment
The difficult and prolonged treatment of autistic disorder must begin early, continue for years (through adolescence), and coordinate efforts to encourage social adjustment and speech development and to reduce self-destructive behavior.
Behavioral techniques are used to decrease symptoms and increase the child’s ability to respond. Positive reinforcement, using food and other rewards, can enhance language and social skills. Providing pleasurable sensory and motor stimulation (such as jogging or playing with a ball) encourages appropriate behavior and helps eliminate inappropriate behavior. Drug therapy with haloperidol or risperidone may be helpful.
Treatment may take place in a psychiatric facility, in a specialized school, or in a day-care program, but the current trend is toward home treatment. Because family members may have difficulty coping with the lifelong demands of this disorder, they may need counseling as well as community and state support systems. Until the causes of infantile autism are known, prevention isn’t possible.
Posted by Ibrahim Hossain at 3:59 PM