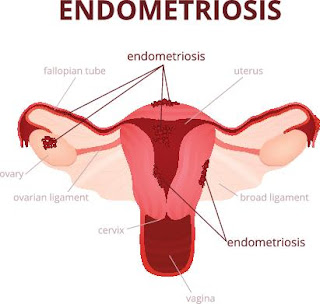 Endometriosis  is defined as the presence of endometrial tissue outside the lining of the uterine cavity. Such ectopic tissue is generally confined to the pelvic area, most commonly around the ovaries, uterovesical peritoneum, uterosacral ligaments, and cul-de-sac, but it can appear anywhere in the body.
This ectopic endometrial tissue responds to normal stimulation in the same way the endometrium does. During menstruation, the ectopic tissue bleeds, causing the surrounding tissues to become inflamed. This inflammation causes fibrosis, leading to adhesions that produce pain and cause infertility.
Active endometriosis usually occurs between ages 30 and 40, but may be seen before age 20. Severe symptoms of endometriosis may have an abrupt onset or develop over many years. This disorder usually becomes progressively severe during the menstrual years; after menopause, it tends to subside.

Causes
The mechanisms by which endometriosis causes symptoms, including infertility, are unknown. The main theories to explain this disorder are:
Signs and symptoms
The classic symptom of endometriosis is acquired dysmenorrhea, which may produce constant pain in the lower abdomen as well as the vagina, posterior pelvis, and back. The pain usually begins 5 to 7 days before menses, reaches its peak on days of bleeding, and lasts for 2 to 3 days. It differs from primary dysmenorrheal pain, which is more cramplike and concentrated in the abdominal midline. The severity of pain doesn’t necessarily indicate the extent of the disease.

Other clinical features depend on the location of the ectopic tissue:
The primary complication of endometriosis is infertility.

Diagnosis
Palpation during a pelvic examination may detect multiple tender nodules on the uterosacral ligaments or in the rectovaginal septum in one-third of patients. These nodules enlarge and become more tender during menses.
Palpation may also uncover ovarian enlargement in the presence of enmetrial cysts on the ovaries or thickened, nodular adnexa (as in pelvic inflammatory disease). Laparoscopy is used to confirm the diagnosis and determine the stage of the disease before treatment is initiated.

Treatment
The stage of the disease and the patient’s age and desire to have children are treatment considerations for endometriosis. In stages I and II (mild forms with superficial endometria and filmy adhesions), conservative therapy for young women who want to have children includes androgens such as danazol, which produce a temporary remission. Progestins and hormonal contraceptives also relieve symptoms. Gonadotropin-releasing hormone agonists, by inducing a pseudomenopause and, thus, a “medical oophorectomy,” have shown a remission of disease and are commonly used.
When ovarian masses are present (stages III and IV), surgery must rule out cancer. Conservative surgery is possible. Radical treatment consists of hysterectomy and, possibly, bilateral salpingo-oophorectomy in severe cases.
Posted by Ibrahim Hossain at 6:41 PM