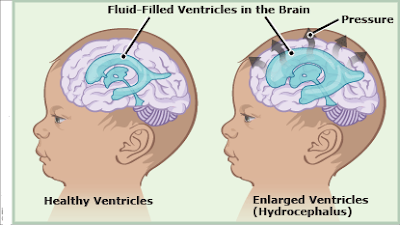 An excessive accumulation of cerebrospinal fluid (CSF) within the ventricular spaces of the brain, hydrocephalus occurs most commonly in neonates. It can also occur in adults as a result of injury or disease. In infants, hydrocephalus enlarges the head, and in both infants and adults, the resulting compression can damage brain tissue.
With early detection and surgical intervention, the prognosis improves but remains guarded. Even after surgery, such complications as developmental delay, impaired motor function, and vision loss can persist. Without surgery, the prognosis is poor: Mortality may result from increased intracranial pressure (ICP) in people of all ages; infants may also die prematurely of infection and malnutrition.

Noncommunicating hydrocephalus
In noncommunicating hydrocephalus, the obstruction occurs most commonly between the third and fourth ventricles, at the aqueduct of Sylvius, but it can also occur at the outlets of the fourth ventricle (foramina of Luschka and Magendie) or, rarely, at the foramen of Monro.
This obstruction may result from faulty fetal development, infection (syphilis, granulomatous diseases, meningitis), a tumor, a cerebral aneurysm, or a blood clot (after intracranial hemorrhage).

Signs and symptoms
In infants, the unmistakable sign of hydrocephalus is enlargement of the head clearly disproportionate to the infant’s growth. Other characteristic changes include distended scalp veins; thin, shiny, fragile-looking scalp skin; and underdeveloped neck muscles.
In severe hydrocephalus, the roof of the orbit’s depressed, the eyes are displaced downward, and the sclerae are prominent. A high-pitched, shrill cry as well as abnormal muscle tone in the legs, irritability, anorexia, and projectile vomiting commonly occur.
In infants, the fontaneles may not feel full due to the infant’s inability to increase the head circumference when the brain is under pressure. Because the sutures aren’t fused, the skull widens to accommodate the pressure.

In adults and older children, indicators of hydrocephalus include a decreased level of consciousness (LOC), headache, nausea, vomiting, and other symptoms of increased intracranial pressure. Ataxia, incontinence, and impaired intellect may also be present.

Diagnosis
In infants, abnormally large head size for the patient’s age strongly suggests hydrocephalus. Skull X-rays show thinning of the skull with separation of sutures and widening of the fontaneles.
Other diagnostic tests, including angiography, computed tomography scans, and magnetic resonance imaging, can differentiate between hydrocephalus and intracranial lesions and can also demonstrate the Arnold-Chiari deformity (a type of neural tube defect), which may occur in an infant with hydrocephalus.

Treatment
Surgical correction is the only treatment for hydrocephalus. Usually, such surgery consists of insertion of a ventriculoperitoneal shunt, which transports excess fluid from the lateral ventricle into the peritoneal cavity.
A less common procedure is insertion of a ventriculoatrial shunt, which drains fluid from the brain’s lateral ventricle into the right atrium of the heart, where the fluid makes its way into the venous circulation. Endoscopic third ventriculostomy (ETV) involves creating a passage between the third ventricle and the basal cisterns. This procedure is used for noncommunicating hydrocephalus in patients over age 2.