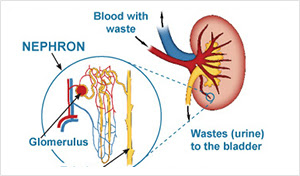 Nephrotic syndrome (or nephrosis) is characterized by marked proteinuria, hypoalbuminemia, hyperlipemia, and edema. Although nephrotic syndrome isn’t a disease itself, it results from a specific glomerular defect and indicates renal damage. The prognosis is highly variable, depending on the underlying cause. Some forms may progress to end-stage renal failure.

Classifications include the following:

Treatment
Effective treatment of nephrotic syndrome necessitates correction of the underlying cause, if possible. Supportive treatment consists of protein replacement with a nutritional diet of 1 g protein/kg of body weight, with restricted sodium intake; a diuretic for edema; and an antibiotic for infection. Immunosuppressants, antihypertensives, and diuretics can also help control symptoms. Angiotension-converting enzyme inhibitors can decrease protein loss in urine.
Some patients respond to a course of corticosteroid therapy (such as prednisone), followed by a maintenance dose. Patients with chronic nephrotic syndrome that’s unresponsive to therapy may require vitamin D replacement.

Posted by Ibrahim Hossain at 3:58 PM

Email ThisBlogThis!Share to TwitterShare to FacebookShare to Pinterest
Labels: Nephrology