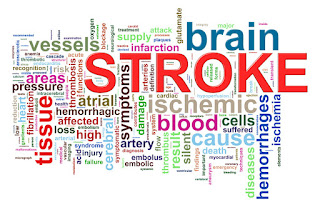 Stroke is a sudden impairment of cerebral circulation in one or more blood vessels supplying the brain. Stroke interrupts or diminishes oxygen supply and commonly causes serious damage or necrosis in brain tissues.
The sooner circulation returns to normal after a stroke, the better the chances are for complete recovery. However, about half of those who survive a stroke remain permanently disabled and experience a recurrence within weeks, months, or years.

The major causes of stroke are thrombosis, embolism, and hemorrhage.

Thrombosis
In middle-aged and elderly people—among whom there’s a higher incidence of atherosclerosis, diabetes, and hypertension—thrombosis is the most common cause of stroke. Obstruction of a blood vessel causes the stroke. Typically, the main site of the obstruction is the extracerebralvessels, but sometimes it’s the intracerebral vessels.
Thrombosis causes ischemia in brain tissue supplied by the affected vessel as well as congestion and edema. The latter may produce more symptoms than the thrombosis itself, but these subside with the edema.
Thrombosis may develop while the patient sleeps or shortly after he awakens; it can also occur during surgery or after a myocardial infarction. The risk increases with obesity, smoking, or the use of hormonal contraceptives. Cocaine-induced ischemic stroke is now seen in younger patients.

Embolism
The second most common cause of stroke, embolism is an occlusion of a blood vessel caused by a fragmented clot, a tumor, fat, bacteria, or air. It can occur at any age, especially among patients with a history of rheumatic heart disease, endocarditis, posttraumatic valvular disease, or myocardial fibrillation and other cardiac arrhythmias or after open-heart surgery or placement of a mechanical heart valve.
The embolus usually develops rapidly—in 10 to 20 seconds—and without warning. When it reaches the cerebral vasculature, it cuts off circulation by lodging in a narrow portion of an artery, most commonly the middle cerebral artery, causing necrosis and edema.
If the embolus is septic and infection extends beyond the vessel wall, an abscess or encephalitis may develop. If the infection is within the vessel wall, an aneurysm may form, which could lead to cerebral hemorrhage.

Hemorrhage
The third most common cause of stroke is hemorrhage. Like an embolism, it may occur suddenly, at any age. Such hemorrhage results from chronic hypertension or aneurysms, which cause sudden rupture of a cerebral artery. The rupture diminishes blood supply to the area served by this artery. In addition, blood accumulates deep within the brain, further compressing neural tissue and causing even greater damage.

Stroke classification
Strokes are classified according to their course of progression.

Signs and symptoms
Signs and symptoms of stroke vary, depending on the artery affected (and, consequently, the portion of the brain it supplies), the severity of damage, and the extent of collateral circulation that develops to help the brain compensate for decreased blood supply.
If the stroke occurs in the left hemisphere, it produces symptoms on the right side; if it occurs in the right hemisphere, it produces symptoms on the left side. However, a stroke that causes cranial nerve damage produces signs of cranial nerve dysfunction on the same side as the hemorrhage.
Symptoms are usually classified according to the artery affected:

Symptoms can also be classified as premonitory, generalized, and focal.
Diagnosis
Confirmation of stroke is based on symptoms, a history of risk factors, and the results of diagnostic tests.

Posted by Ibrahim Hossain at 1:00 PM