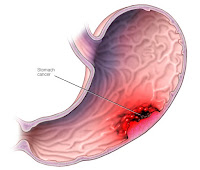 Introduction
Common throughout the world, gastric cancer affects all races. However, unexplained geographic and cultural differences in incidence occur; for example, mortality is high in Japan, Iceland, Chile, and Austria. In the United States, incidence has decreased 50% during the past 25 years, and the death rate from gastric cancer is one-third that of 30 years ago.
The decrease in gastric cancer incidence in the United States has been attributed, without proof, to the balanced American diet and to refrigeration, which reduces the number of nitrate-producing bacteria in food.
Incidence is highest in men over age 40. The prognosis depends on the stage of the disease at the time of diagnosis; overall, the 5-year survival rate is about 15%.

Etiology
The cause of gastric cancer is unknown.

This cancer is commonly associated with
Predisposing factors include environmental influences, such as smoking and high alcohol intake.
Genetic factors have also been implicated because this disease occurs more frequently among people with type A blood than among those with type O; similarly, it’s more common in people with a family history of such cancer.
Dietary factors include types of food preparation, physical properties of some foods, and certain methods of food preservation (especially smoking, pickling, and salting).

Classification
According to gross appearance, gastric cancer can be classified as
The parts of the stomach affected by gastric cancer, listed in order of decreasing frequency, are
Metastasis
Gastric cancer metastasizes rapidly to the regional lymph nodes, omentum, liver, and lungs by the following routes: walls of the stomach, duodenum, and esophagus; lymphatic system; adjacent organs; bloodstream; and peritoneal cavity.

Clinical Manifestations
Early clues to gastric cancer are chronic dyspepsia and epigastric discomfort, followed in later stages by weight loss, anorexia, a feeling of fullness after eating, anemia, and fatigue. If the cancer is in the cardia, the first symptom may be dysphagia and, later, vomiting (typically coffee-ground vomitus). Affected patients may also have blood in their stools.
The course of gastric cancer may be insidious or fulminating. The patient typically treats himself with antacids until the symptoms of advanced stages appear.

Diagnosis
Diagnosis depends primarily on investigations of persistent or recurring GI changes and complaints. To rule out other conditions that produce similar symptoms, a diagnostic evaluation must include the testing of blood, stools, and stomach fluid specimens.
Gastric cancer commonly requires the following studies for diagnosis:
The following studies may rule out metastasis to specific organs: computed tomography scans, chest X-rays, liver and bone scans, and a liver biopsy.

Treatment
Surgery is commonly the treatment of choice. Excision of the lesion with appropriate margins is possible in more than one-third of patients. Even in patients whose disease isn’t considered surgically curable, resection offers palliation and improves potential benefits from chemotherapy and radiation therapy.

Surgery
The nature and extent of the lesion determine what kind of surgery is most appropriate. Common surgical procedures include subtotal gastrectomy and total gastrectomy.
When cancer involves the pylorus and antrum, gastrectomy removes the lower stomach and duodenum (gastrojejunostomy or Billroth II). If metastasis has occurred, the omentum and spleen may also have to be removed.
If gastric cancer has spread to the liver, peritoneum, or lymph glands, palliative surgery may include gastro-stomy, jejunostomy, or a total or subtotal gastrectomy. Such surgery may temporarily relieve vomiting, nausea, pain, and dysphagia while allowing enteral nutrition to continue.

Other treatments
Chemotherapy for GI cancers may help to control symptoms and prolong survival. Adenocarcinoma of the stomach has responded to several agents, including fluorouracil, carmustine, doxorubicin, cisplatin, methotrexate, and mitomycin.


Antiemetics can control nausea, which increases as the cancer advances. In the more advanced stages, sedatives and tranquilizers may be necessary to control overwhelming anxiety. Narcotics are necessary in many cases to relieve severe and unremitting pain.
Radiation therapy has been particularly useful when combined with chemotherapy in patients who have unresectable or partially resectable disease. It should be given on an empty stomach and shouldn’t be used preoperatively because it may damage viscera and impede healing.
Treatment with antispasmodics and antacids may help relieve GI distress.
Posted by Ibrahim Hossain at 12:50 PM