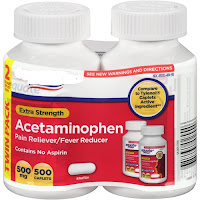 What Is Acetaminophen?
A widely used medicine that almost every one knows also known as Paracetamol or Tylenol. It is a pain reliever and fever reducer. It is classified as a mild analgesic drug.

Medical Uses:Acetaminophen is commonly used for a wide variety of conditions like :
How To Use It ?
Acetaminophen comes in the form of tablets, chewable tablets, solution, suspension, suppositories and is available easily over the counter without a need for prescription. While giving it to children it is important to calculate the dose according to the weight of the child. The usual dose for an average adult is 500 mg every 8 hrs but it may vary depending on the condition for it is prescribed. It is also available in various combinations like used for severe pain or post surgical pain in combination with opioid analgesics or in combination with an antihistamine for symptoms of cold and fever.

Mechanism Of Action:
The exact mechanism of action is not known but it is believed that acetaminophen works by inhibition of cyclooxygenase. Pharmacologically it is classified as a centrally acting antipyretic and analgesic drug. Some studies also show that the analgesic effect of acetaminophen is due to increased threshold of pain.

Side Effects: Although considered a safe drug like any other medicine it can have certain side effects like:
Over Dose Or Toxicity:Since it is an easily available drug overdose is common either intentionally or accidentally.
Antidote for toxicity is N-acetycystenine but in severe cases even liver transplantation may be required.

Use In Pregnancy: It is considered to be safe to use acetaminophen during pregnancy and studies show no increase risk of any congenital malformations.

Contraindications:
It is not to be used in patients with

Posted by Ibrahim Hossain at 9:30 AM