Introduction: Aortic Dissection is a condition in which the aortic intima tears, exposing a diseased media that is split in two longitudinally by the force of the blood flow. This dissection usually progresses distally for a variable distance. Medial degeneration is often idiopathic but may be the result of cystic medial necrosis, especially in Marfan’s syndrome.

Associations: It is commonly seen in patients with Marfan syndrome. There is also an association with the following:
• hypertension (history of hypertension in 80% of cases);
• pregnancy;
• trauma.

Disease Classification: Aortic dissection is classified according to whether there is involvement of the ascending aorta (Stanford classification). This has practical and prognostic implications. 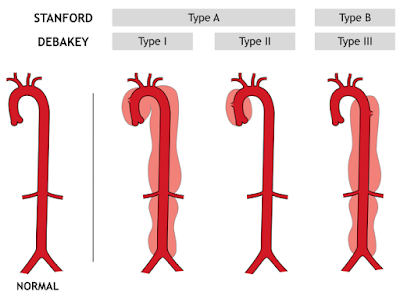 Clinical Presentation:
1.Common: There is central chest pain in 90% of cases, classically a ‘tearing’ pain that migrates to the back (interscapular) as dissection proceeds. A dissected aorta found incidentally in a patient without pain is usually chronic and therefore low risk. Thoracic back pain of sudden onset is also common.

Investigations:
1. ECG: The ECG may reveal inferior myocardial infarction, if dissection extends to the right coronary artery. Anterior infarction is rarely seen, perhaps because occlusion of the left main coronary artery results in such a big infarct that the patient does not reach hospital alive.

2. Chest radiograph: This may show widened mediastinum but an absence of this does not rule out aortic dissection. Blood in the pleural space from a leaking aorta may show as an effusion.

4. Other investigations: Consider the following:
• CT scan of the chest with contrast;
• aortography;
• MRI;

• Type B dissection is generally managed medically because the risks of surgery outweigh the benefits. Consider surgery if there is a rupture or vital organ/limb ischaemia. More recently, endovascular stenting has been used with some success in selected patients who were poor candidates for surgery.

Complications: Death caused by aortic rupture or tamponade is common. Occlusion of any of the major aortic branches may occur, producing the following:
• hemiplegia;
• acute renal failure;
• mesenteric ischaemia;
• lower limb ischaemia
Posted by Ibrahim Hossain at 9:01 AM