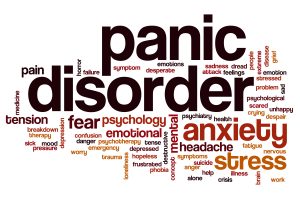 Panic disorder is an anxiety disorder that is characterized by sudden attacks of fear and panic. A panic attack may be defined has a sudden, intense experience of fear coupled with an overwhelming feeling of danger and death.

Incidence
It occurs in 1-3 % of the population ; female to male ratio is 2 : 1. Familial aggregation is common. Onset is usually in the second or third decade of life.

Clinical Presentation
Initial presentation is almost always to a non psychiatric doctor , frequently in the ER as a possible heart attack or serious respiratory problem. The disorder is often intially unrecognized or misdiagnosed.

Usually reach a peak within 10 minutes , then slowly resolve spontaneously.

Cognitive behavioral psychotherapy – identifying and aborting panic attacks through relaxation and breathing techniques either alone or in combination with medication is effective. The cornerstone of drug therapy is antidepressant medications.

SSRIs are equally effective ; they should be started at one third to one half of their usual anti depressant dose.

Benzodiazepines may be used in short term while waiting for antidepressants to take effect.

Prognosis
When the disorder goes unrecognized and untreated , patients often experience significant morbidity, they become afraid of leaving home or may develop anticipatory anxiety and different phobias. Also may turn to self medication with alcohol or benzodiazepines
Posted by Ibrahim Hossain at 9:46 AM