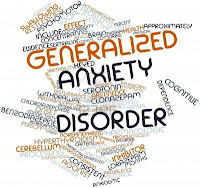 Anxiety is a feeling of apprehension that some describe as an exaggerated sensation of impending doom, dread, or uneasiness. Unlike fear—a reaction to danger from a specific external source—anxiety is a reaction to an internal threat, such as an unacceptable impulse or a repressed thought that’s straining to reach a conscious level.
A rational response to a real threat, occasional anxiety is a normal part of life. Overwhelming anxiety, however, can result in generalized anxiety disorder—uncontrollable, unreasonable worry that persists for at least 6 months and narrows perceptions or interferes with normal functioning. Recent evidence indicates that the incidence of generalized anxiety disorder is greater than previously thought and may be even greater than that of depression.

Signs and symptoms
Generalized anxiety disorder can begin at any age but typically has an onset between ages 20 and 40. It’s equally common in men and women. Psychological or physiologic symptoms of anxiety states vary with the degree of anxiety. Mild anxiety mainly causes psychological symptoms, with unusual self-awareness and alertness to the environment. Moderate anxiety leads to selective inattention but with the ability to concentrate on a single task. Severe anxiety causes an inability to concentrate on more than scattered details of a task. A panic state with acute anxiety causes a complete loss of concentration, often with unintelligible speech.

Physical examination of the patient with generalized anxiety disorder may reveal symptoms of motor tension, including trembling, muscle aches and spasms, headaches, and an inability to relax. Autonomic signs and symptoms include shortness of breath, tachycardia, sweating, and abdominal complaints.
In addition, the patient may startle easily and complain of feeling apprehensive, fearful, or angry and of having difficulty concentrating, eating, and sleeping. The medical, psychiatric, and psychosocial histories fail to identify a specific physical or environmental cause of the anxiety.

Diagnosis
Laboratory tests must exclude organic causes of the patient’s signs and symptoms, such as hyperthyroidism, pheochromocytoma, coronary artery disease, supraventricular tachycardia, and Ménière’s disease. For example, an electrocardiogram can rule out myocardial ischemia in a patient who complains of chest pain. Blood tests—including a complete blood count, white blood cell count and differential, and serum lactate and calcium levels—can rule out hypocalcemia.
Because anxiety is the central feature of other mental disorders, psychiatric evaluation must rule out phobias, obsessive-compulsive disorders, depression, and acute schizophrenia.

Treatment
A combination of drug therapy and psychotherapy may help a patient with generalized anxiety disorder. Benzodiazepine anxiolytics relieve mild anxiety and improve the patient’s ability to cope. They should be used cautiously, however, because they can be addictive.

Buspirone, a nonbenzodiazepine anxiolytic, is an alternative to the benzodiazepines because it causes less sedation and poses less risk of physical and psychological dependence.
Psychotherapy for generalized anxiety disorder has two goals: helping the patient identify and deal with the underlying emotional and psychological issues and eliminating environmental factors that precipitate an anxious reaction. In addition, the patient can learn relaxation techniques, such as deep breathing, progressive muscle relaxation, focused relaxation, and visualization.
Posted by Ibrahim Hossain at 2:57 PM