Introduction: A diuretic is a medicine that causes an increase in urine and the amount of water excreted from the kidneys. Loop diuretics are the drugs that act on the the ascending loop of Henle in the kidney to cause diuresis and are so named as loop diuretics.

Mode of Action: Loop diuretics inhibit the Na+/K+/2Cl- co-transporter in the thick ascending loop of Henle, in the kidneys and stop the transport of sodium chloride out of the tubule into the interstitial tissue, causing a decrease in sodium and chloride re-absorption. They act on the chloride-binding site and have a direct inhibiting effect on the carrier.
Inhibition of this transporter leads to a significant increase in concentration of ions in the tubule and reduced hypertonicity in the surrounding interstitium, causing less water to be reabsorbed into the blood. This causes more urine to be produced and a decrease in blood volume. 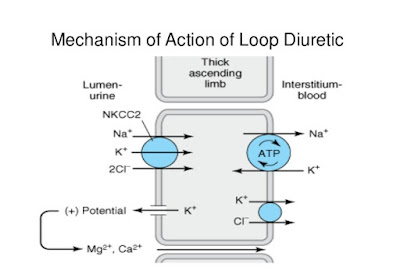 Posted by Ibrahim Hossain at 9:28 AM