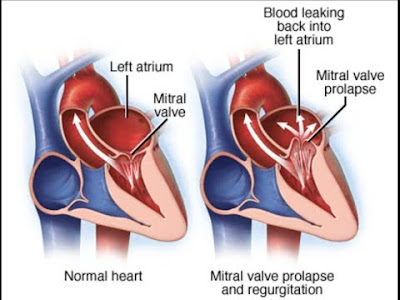 Etiology
MVP exhibits a strong hereditary component and in some patients is transmitted as an autosomal dominant trait.

It is twice as frequent in women as in men.

Pathology
It develops due to myxomatous degeneration of mitral valve in which middle layer of valve leaflet composed of loose, myxomatous material is unusually prominent.

ECG: may be normal or may show arrhthymias such as SVT or atrial or ventricular premature contractions.

Echocardiography: is diagnostic of MVP. It shows one or both mitral leaflets bulging by atleast 2 mm into the left atrium during systole.

Posted by Ibrahim Hossain at 3:22 PM

Email ThisBlogThis!Share to TwitterShare to FacebookShare to Pinterest
Labels: Cardiology