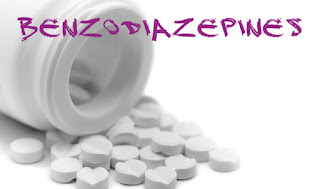 Introduction:
Benzodiazepines are a class of drugs also know as tranquilizers that acts on the central nervous system and are mainly used to treat different anxiety disorders.

Common Drugs In this Group:
All benzodiazepines are similar in pharmacological action but have different potencies, and some bezodiazepines work better in the treatment of certain conditions than the other. They are used mainly as sedatives, hypnotics, muscle relaxants, anxiolytics and anticonvulsants. Common drugs in this group include:

Medical Uses: Benzodiazepines may be prescribed for one of these conditions:
Side Effects: The common side effects may include:
Abuse of Benzodiazepienes: Benzodiazepiens are commonly abused and this may be partially due to wide spread availability and the toxic effects that they produce. They can be chronically abused or may be intentionally or accidentally taken in overdose. Death and serious illness rarely occur if benzodiazepienes are taken alone but most people abuse it by using it with other depressants and alcohol. They have also been used as a ‘date rape” drug as they can markedly impair the ability of a person to resist sexual assault.

Overdose: Although these are considered to be safe drugs and don’t cause much harm if take alone in overdose but still the statistics show that it may cause death in a very small percentage of people who took it in overdose. Flumazenil is the antidote used for overdose but itself has many side effects and is routinely not recommended.

Contraindication : Because these drugs cause muscle relaxation it may lead to respiratory depression in susceptible individuals. It is contraindicated to be used in:

Posted by Ibrahim Hossain at 9:37 AM