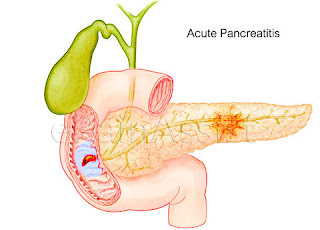 Pancreatitis is an inflammatory process in which pancreatic enzymes autodigest the gland. Acute pancreatitis is sudden swelling and inflammation of the pancreas. In acute cases the gland heals without any impairment of function or any morphologic changes.

Acute pancreatitis can have severe complications and high mortality despite treatment. While mild cases are often successfully treated with conservative measures.

Etiology
The pancreas is an organ located behind the stomach that produces chemicals called enzymes, as well as the hormones insulin and glucagon. Most of the time, the enzymes are only active after they reach the small intestine, where they are needed to digest food.

When these enzymes somehow become active inside the pancreas, they eat (and digest) the tissue of the pancreas. This causes swelling, bleeding (hemorrhage), and damage to the pancreas and its blood vessels.

The condition is most often caused by alcoholism and alcohol abuse (70% of cases in the United States). Genetics may be a factor in some cases. Sometimes the cause is not known, however.

Quality of Pain
-People with acute pancreatitis usually feel very sick. Besides pain, people may have other symptoms and signs.
-Nausea (Some people do vomit, but vomiting does not relieve the symptoms.)
-Fever, chills, or both
-Swollen abdomen which is tender to the touch
-Rapid heartbeat (A rapid heartbeat may be due to the pain and fever, dehydration from vomiting and not eating, or it may be a compensation mechanism if a person is bleeding internally.)

In very severe cases with infection or bleeding, a person may become dehydrated and have low blood pressure.

If the blood pressure becomes extremely low, the organs of the body do not get enough blood to carry out their normal functions. This very dangerous condition is called circulatory shock and is referred to simply as shock.

Lipase has a slightly longer half-life and abnormalities may support the diagnosis if a delay occurs between the pain episode and the time the patient seeks medical attention.

Elevated lipase levels are more specific to the pancreas than elevated amylase levels.

The level of serum amylase or lipase does not indicate whether the disease is mild, moderate, or severe, and monitoring levels serially during the course of hospitalization does not offer insight into prognosis.

Obtain measurements for blood urea nitrogen (BUN), creatine, and electrolytes; a great disturbance in the electrolyte balance is usually found, secondary to third spacing of fluids. Measure blood glucose level because it may be elevated from B-cell injury in the pancreas.

Abdominal radiographs have a limited role in acute pancreatitis.

Ultrasonography of the abdomen is the most useful initial test in determining the etiology of pancreatitis and is the technique of choice for detecting gallstones. Although ultrasonography can be used as a screening test, it may not be specific if overlying gas shadows secondary to bowel distention are present. Ultrasonography cannot measure the severity of disease.

CT is an important common initial assessment tool for acute pancreatitis. Imaging is indicated during the initial presentation if:
-the diagnosis of acute pancreatitis is uncertain
-there is abdominal distension and tenderness, fever>102, or leukocytosis
-there is no improvement after 72 hours of conservative medical therapy
-there has been an acute change in status: fever, pain, or shock

While CT is considered the gold standard in diagnostic imaging for acute pancreatitis, magnetic resonance imaging (MRI) has become increasingly valuable as a tool for the visualization of the pancreas, particularly of pancreatic fluid collections and necrotized debris. Additional utility of MRI includes its indication for imaging of patients with an allergy to CT’s contrast material, and an overall greater sensitivity to hemorrhage, vascular complications, pseudoaneurysms, and venous thrombosis.

Treatment
Treatment often requires a stay in the hospital and may involve:
Occasionally a tube will be inserted through the nose or mouth to remove the contents of the stomach (nasogastric suctioning). This may be done if vomiting or severe pain do not improve, or if a paralyzed bowel (paralytic ileus) develops. The tube will stay in for 1 – 2 days to 1 – 2 weeks.

Treating the condition that caused the problem can prevent repeated attacks.

In some cases, therapy is needed to:
In the most severe cases, surgery is needed to remove dead or infected pancreatic tissue.

Avoid smoking, alcoholic drinks, and fatty foods after the attack has improved.
Posted by Ibrahim Hossain at 3:35 PM