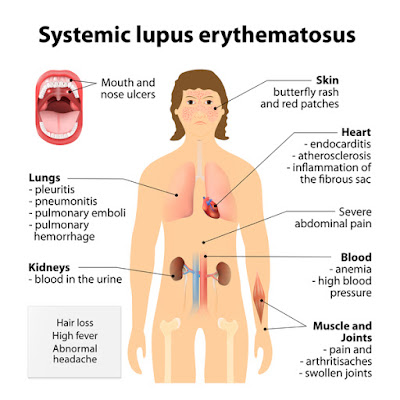 Definition
Systemic lupus erythematosus (SLE) is a chronic inflammatory autoimmune disorder that affects the connective tissues. SLE is characterized by recurring remissions and exacerbations, which are especially common during the spring and summer.

Etiology:
The direct cause is unknown but it can be predisposed by certain factors
Predisposing factors
Pathophysiology
Autoimmunity is believed to be the prime mechanism in SLE. The body produces antibodies against components of its own cells, such as the antinuclear antibody (ANA), and immune complex disease follows. Patients with SLE may produce antibodies against many different tissue components, such as red blood cells (RBCs), neutrophils, platelets, lymphocytes, or almost any organ or tissue in the body.

Electrocardiogram reveals a conduction defect with cardiac involvement or pericarditis.

Renal biopsy shows the progression of SLE and the extent of renal involvement.
Skin biopsy shows immunoglobulin and complement deposition in the dermal-epidermal junction in 90% of patients.

Treatment
Prognosis
The prognosis improves with early detection and treatment but remains poor for patients who develop cardiovascular, renal, or neurologic complications, or severe bacterial infections.
Posted by Ibrahim Hossain at 8:51 AM