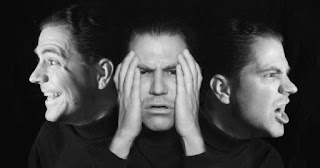 Bipolar disorder or bipolar affective disorder, historically known as manic-depressive disorder, is a psychiatric diagnosis that describes a category of mood disorders defined by the presence of one or more episodes of abnormally elevated energy levels, cognition, and mood with or without one or more depressive episodes.

Bipolar disorder, or manic-depressive illness (MDI), is one of the most common, severe, and persistent mental illnesses. Bipolar disorder is a serious lifelong struggle and challenge. It is also useful to note that other mental health disorders and general medical conditions are more prevalent in patients with bipolar disorders.

Bipolar disorder is characterized by periods of deep, prolonged, and profound depression that alternate with periods of an excessively elevated or irritable mood known as mania. The symptoms of mania include a decreased need for sleep, pressured speech, increased libido, reckless behavior without regard for consequences, grandiosity, and severe thought disturbances, which may or may not include psychosis. Between these highs and lows, patients usually experience periods of higher functionality and can lead a productive life.

First-degree relatives of people with BPI are approximately 7 times more likely to develop BPI than the general population.

Multiple biochemical pathways likely contribute to bipolar disorder, which is why detecting one particular abnormality is difficult.

In some instances, the cycle may be directly linked to external stresses or the external pressures may serve to exacerbate some underlying genetic or biochemical predisposition.

Pregnancy is a particular stress for women with a manic-depressive illness history and increases the possibility of postpartum psychosis.

Clinical Signs and Symptoms
Bipolar disorder is a condition in which people experience intermittent abnormally elevated (manic or hypomanic) and, in many cases, abnormally depressed states for periods of time in a way that interferes with functioning. Not everyone’s symptoms are the same, and there is no simple physiological test to confirm the disorder. Bipolar disorder can appear to be unipolar depression. Diagnosing bipolar disorder is often difficult, even for mental health professionals. What distinguishes bipolar disorder from unipolar depression is that the affected person experiences states of mania and depression. Often bipolar is inconsistent among patients because some people feel depressed more often than not and experience little mania whereas others experience predominantly manic symptoms. Additionally, the younger the age of onset—bipolar disorder starts in childhood or early adulthood in most patients—the more likely the first few episodes are to be depression. Because a bipolar diagnosis requires a manic or hypomanic episode, many patients are initially diagnosed and treated as having major depression.

Manic Episodes
Manic episodes are characterized by at least 1 week of profound mood disturbance, characterized by elation, irritability, or expansiveness (referred to as gateway criteria). At least 3 of the following symptoms must also be present:
Hypomanic Episodes
Hypomanic episodes are characterized by an elevated, expansive, or irritable mood of at least 4 days’ duration. At least 3 of the following symptoms are also present:
Complications
The main complications of bipolar disorder are suicide, homicide, and addictions.

Diagnosis
Diagnosis is based on the self-reported experiences of an individual as well as abnormalities in behavior reported by family members, friends or co-workers, followed by secondary signs observed by a psychiatrist, nurse, social worker,clinical pathologist or other clinician in a clinical assessment. There are lists of criteria for someone to be so diagnosed. These depend on both the presence and duration of certain signs and symptoms. Assessment is usually done on an outpatient basis; admission to an inpatient facility is considered if there is a risk to oneself or others. The most widely used criteria for diagnosing bipolar disorder are from the American Psychiatric Association’s Diagnostic and Statistical manual of mental disorders, the current version being DSM-IV-TR, and the WHO’s International Statistical Classification of Diseases and Related Health Problems, currently the ICD-10. The latter criteria are typically used in Europe and other regions while the DSM criteria are used in the USA and other regions, as well as prevailing in research studies. The DSM-V, to be published in 2013, will likely include further and more accurate sub-typing.

An initial assessment may include a physical exam by a physician. Although there are no biological tests which confirm bipolar disorder, tests may be carried out to exclude medical illnesses such as hypo or hyperthyroidism, metabolic disturbance, a systemic infection or chronic disease, and syphilis or HIV infection. An EEG may be used to exclude epilepsy, and a CT scan of the head to exclude brain lesions. Investigations are not generally repeated for relapse unless there is a specific medical indication.

Management
The treatment of bipolar disorder is directly related to the phase of the episode (ie, depression or mania) and the severity of that phase.

The indications for inpatient treatment in a person with bipolar disorder include the following:
Pharmacological Treatment
Appropriate medication depends on the stage of the bipolar disorder the patient is experiencing. Thus, a number of drugs are indicated for an acute manic episode, primarily the antipsychotics, valproate, and benzodiazepines (eg, lorazepam, clonazepam). The choice of agent depends on the presence of symptoms such as psychotic symptoms, agitation, aggression, and sleep disturbance.
Lithium is the drug commonly used for prophylaxis and treatment of manic episodes. A recent study suggests that lithium may also have a neuroprotective role. However, it is also associated with increased risk of reduced urinary concentrating ability, hypothyroidism, hyperparathyroidism, and weight gain.
Atypical antipsychotics are being used increasingly for treatment of both acute mania and mood stabilization. The broad range of antidepressants and ECT are used for an acute depressive episode (ie, major depression).
Although antidepressant medications are most often prescribed for patients with bipolar disorder who are experiencing an acute depression, a study found that antidepressants were not statistically superior to placebo or other current standard treatment for bipolar depression.
According to a multiple treatments meta-analysis of treatments for acute mania, haloperidol, risperidone, and olanzapine are the most efficacious treatments, significantly outperforming primary mood stabilizers and other antipsychotic medications.
Prognosis
Bipolar disorder has significant morbidity and mortality rates.
Patients with BPI fare worse than patients with a major depression.

Posted by Ibrahim Hossain at 6:22 AM