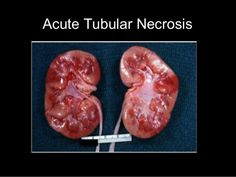 Introduction
Also known as acute tubulointerstitial nephritis, acute tubular necrosis (ATN) is the most common cause of acute renal failure in critically ill patients, and it accounts for about 75% of all cases of acute renal failure. ATN injures the tubular segment of the nephron, causing renal failure and uremic syndrome. Mortality ranges from 40% to 70%, depending on complications from underlying diseases. Patients with non-oliguric forms of ATN have a better prognosis.
Causes
ATN results from ischemic or nephrotoxic injury, most commonly in debilitated patients, such as the critically ill and those who have undergone extensive surgery.
With ischemic injury, disruption of blood flow to the kidneys may result from circulatory collapse, severe hypotension, trauma, hemorrhage, dehydration, cardiogenic or septic shock, surgery, anesthetics, or reactions to transfusions. Ischemic ATN can damage the epithelial and basement membranes and can cause lesions in the renal interstitium.
With nephrotoxic injury, damage may follow ingestion of certain chemical agents or result from a hypersensitive reaction of the kidneys. Because nephrotoxic ATN doesn’t damage the basement membrane of the nephron, it’s potentially reversible.
ATN may result from:
Signs and symptoms
ATN is usually difficult to recognize in its early stages because effects of the critically ill patient’s primary disease may mask the symptoms of ATN. The first recognizable effect may be decreased urine output. Generally, hyperkalemia and the characteristic uremic syndrome soon follow, with oliguria (or, rarely, anuria) and confusion, which may progress to uremic coma. Other complications include heart failure, uremic pericarditis, pulmonary edema, uremic lung, anemia, anorexia, intractable vomiting, and poor wound healing due to debilitation.
Fever and chills are ominous indications of infection, the leading cause of death in patients with ATN.
Diagnosis
ATN is hard to diagnose accurately until it has progressed to an advanced stage. The most significant laboratory clues are urinary sediment containing RBCs and casts and diluted urine with a low specific gravity (1.010), low osmolality (less than 400 mOsm/kg), and a high sodium level (40 to 60 mEq/L).
Blood studies reveal elevated blood urea nitrogen and serum creatinine levels, anemia, defects in platelet adherence, metabolic acidosis, and hyperkalemia. An electrocardiogram may show arrhythmias (from electrolyte imbalances) and, with hyperkalemia, a widening QRS segment, disappearing P waves, and tall, peaked T waves.
Treatment

Posted by Ibrahim Hossain at 8:52 PM

Email ThisBlogThis!Share to TwitterShare to FacebookShare to Pinterest
Labels: Nephrology