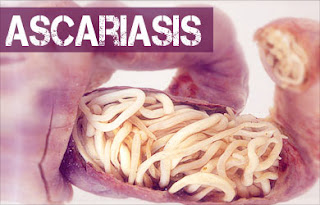 Also known as roundworm infection, ascariasis is caused by the parasitic worm Ascaris lumbricoides. It occurs worldwide but is most common in tropical areas with poor sanitation and in Asia, where farmers use human stool as fertilizer. In the United States, it’s more prevalent in the South, particularly among younger children.

Causes
A. lumbricoides is a large roundworm resembling an earthworm. It’s transmitted to humans by ingestion of soil contaminated with human stool that harbors A. lumbricoides ova. Such ingestion may occur directly (by eating contaminated soil) or indirectly (by eating poorly washed raw vegetables grown in contaminated soil).
Ascariasis never passes directly from person to person. After ingestion, A. lumbricoides ova hatch and release larvae, which penetrate the intestinal wall and reach the lungs through the bloodstream. After about 10 days in pulmonary capillaries and alveoli, the larvae migrate to the bronchioles, bronchi, trachea, and epiglottis. There they’re swallowed and return to the intestine to mature into worms.

Signs and symptoms
Mild intestinal ascariasis may cause only vague stomach discomfort. The first clue may be vomiting a worm or passing a worm in the stool. In established infection, adult worms usually cause no symptoms. Severe disease, however, causes stomach pain, vomiting, restlessness, disturbed sleep and, in extreme cases, intestinal obstruction. Larvae migrating by the lymphatic and the circulatory systems cause various symptoms—for example, when they invade the lungs, pneumonitis may result.

Diagnosis
Microscopic identification of ova in the stool or observation of adult worms, which may be passed rectally or by mouth, confirms the diagnosis. When migrating larvae invade the alveoli, other conclusive tests include X-rays that show characteristic bronchovascular markings: infiltrates, patchy areas of pneumonitis, and widening of hilar shadows. In a patient with ascariasis, these findings usually accompany a complete blood count that shows eosinophilia.

Treatment
Anthelmintic therapy, the primary treatment, consists of pyrantel or piperazine to temporarily paralyze the worms, permitting peristalsis to expel them. Mebendazole and albendazole are also used to block helminth nutrition.
The benzimidazoles are contraindicated in pregnant patients and in patients with severe infections because they may cause ectopic migration.
If the patient has intestinal obstruction, nasogastric (NG) suctioning controls vomiting. When suctioning can be discontinued, instill piperazine and clamp the tube. If vomiting doesn’t occur, give a second dose of oral piperazine 24 hours later. If this is ineffective, treatment probably requires surgery.

Posted by Ibrahim Hossain at 2:36 PM