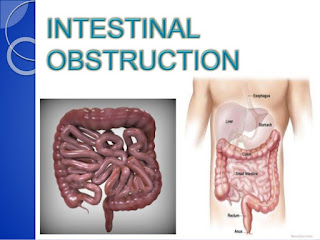 An intestinal obstruction is a partial or complete blockage of the lumen in the small or large bowel. A small-bowel obstruction is more common (90% of patients) and usually more serious. A complete obstruction in any part of the bowel, if untreated, can cause death within hours from shock and vascular collapse. Intestinal obstructions are most likely to occur from adhesions caused by previous abdominal surgery, an external hernia, volvulus, Crohn’s disease, radiation enteritis, an intestinal wall hematoma (after trauma or anticoagulant therapy), or a neoplasm.

A mechanical intestinal obstruction results from a foreign body (fruit pits, gallstones, or worms) or compression of the bowel wall due to stenosis, intussusception, volvulus of the sigmoid or cecum, tumors, or atresia.

A nonmechanical obstruction results from a physiologic disturbance, such as paralytic ileus (see Paralytic ileus), electrolyte imbalance, toxicity (uremia or generalized infection), a neurogenic abnormality (spinal cord lesions), or thrombosis or embolism of mesenteric vessels.
The three forms of intestinal obstruction are:
Pathophysiology
In all three forms, the physiologic effects are similar. When intestinal obstruction occurs, fluid, air, and gas collect near the site. Peristalsis increases temporarily as the bowel tries to force its contents through the obstruction, injuring intestinal mucosa and causing distention at and above the site of the obstruction. This distention blocks the flow of venous blood and halts normal absorptive processes. As a result, the bowel begins to secrete water, sodium, and potassium into the fluid pooled in the lumen. This results in distention and enormous amounts of fluid in the gut.
An obstruction in the upper intestine results in metabolic alkalosis from dehydration and loss of gastric hydrochloric acid; a lower obstruction causes slower dehydration and loss of intestinal alkaline fluids, resulting in metabolic acidosis. Ultimately, an intestinal obstruction may lead to ischemia, necrosis, and death.

1. Paralytic ileus
Paralytic (adynamic) ileus is a physiologic form of intestinal obstruction that may develop in the small bowel after abdominal surgery. It causes decreased or absent intestinal motility that usually disappears spontaneously after 2 to 3 days.

Causes: Paralytic ileus can develop as a result of trauma, toxemia, peritonitis, electrolyte deficiency (especially hypokalemia), or the use of certain drugs, such as pain medications, ganglionic blockers, or anticholinergics. It can also result from vascular causes, such as thrombosis and embolism.

Signs and symptoms of paralytic ileus include severe, continuous abdominal discomfort with nausea and vomiting. Abdominal distention is also present. Bowel sounds are diminished or absent. The patient may be severely constipated or may pass flatus and small, liquid stools.

Treatment: Paralytic ileus that lasts longer than 48 hours necessitates intubation for decompression and nasogastric suctioning. Isotonic fluids should be administered to restore intravascular volume and correct electrolyte disorders.
When paralytic ileus results from surgical manipulation of the bowel, treatment may also include administration of a prokinetic drug, such as metoclopramide, erythromycin, or cisapride.

3. Complete small-bowel obstruction
In a complete small-intestinal (small-bowel) obstruction, vigorous peristaltic waves propel bowel contents toward the mouth instead of the rectum. Spasms may occur every 3 to 5 minutes and last about 1 minute each, with persistent epigastric or periumbilical pain. Small amounts of mucus and blood may be passed. The higher the obstruction, the earlier and more severe the vomiting. Vomitus initially contains gastric juice, then bile, and finally fecal contents of the ileum. Constipation develops with complete obstruction. There’s minimal or no fever. Abdominal distention is pronounced. Mild tenderness is present. Peristaltic rushes and high-pitched tinkles occur during paroxysms of pain. Visible peristalsis may be noted.

4. Partial large-bowel obstruction
Symptoms of large-bowel obstruction develop more slowly because the colon can absorb fluid from its contents and distend well beyond its normal size. Constipation may be the only symptoms for days. Colicky abdominal pain may appear suddenly, producing spasms that last less than 1 minute each and recur every few minutes. Continuous hypogastric pain and nausea may develop, but vomiting is initially absent.
Large-bowel obstruction can cause dramatic abdominal distention: Loops of large bowel may become visible on the abdomen.

Diagnosis
Progressive, colicky abdominal pain and distention, with or without nausea and vomiting, suggest bowel obstruction. Plain abdominal radiography confirms the diagnosis.
Abdominal films show the presence and location of intestinal gas or fluid.
Laboratory results that support this diagnosis include:
Treatment
Initial therapy involves correcting fluid and electrolyte imbalances, resting the bowel by decompressing it to relieve vomiting and distention, maintaining nothing by mouth status, and treating shock and peritonitis. A strangulated obstruction usually necessitates blood replacement as well as I.V. fluid administration. Nasogastric tube suction is necessary to relieve vomiting and abdominal distention.
Close monitoring of the patient’s condition determines the duration of treatment; if the patient fails to improve or if his condition deteriorates, surgery is necessary. Surgery is performed on all patients with large-bowel obstruction.
Total parenteral nutrition may be appropriate if the patient suffers a protein deficit from chronic obstruction, postoperative or paralytic ileus, or infection.
Drug therapy includes an analgesic and a sedative. An antibiotic is given for peritonitis due to bowel strangulation or infarction. A broad-spectrum antibiotic should be given to provide anaerobic and gram-negative coverage.
Posted by Ibrahim Hossain at 9:14 AM