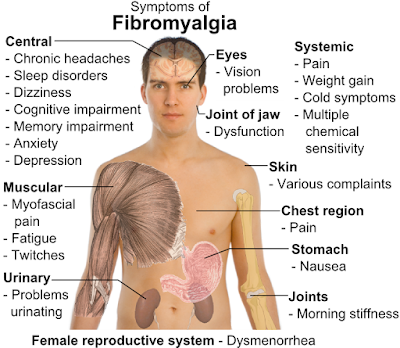 Introduction
A diffuse pain syndrome, fibromyalgia syndrome (FMS, previously called fibrositis) is one of the most common causes of chronic musculoskeletal pain; it’s observed in up to 15% of patients seen in a general rheumatology practice and 5% of general medicine clinic patients. Symptoms of FMS include diffuse musculoskeletal pain, daily fatigue, and sleep disturbances. Multiple tender points in specific areas on examination are the characteristic feature. Women are affected much more commonly than men, and although FMS can affect all age-groups, its peak incidence is between ages 20 and 60. It may occur as a primary disorder or in association with an underlying disease, such as systemic lupus erythematosus, rheumatoid arthritis, osteoarthritis, sleep apnea syndromes, and neck trauma.
Causes
The cause of FMS is unknown, but many theories exist regarding its pathophysiology. Although the pain is located primarily in muscle areas, no distinct abnormalities have been documented on microscopic evaluation of biopsies of tender points when compared to normal muscle. Other theories suggest decreased blood flow to muscle tissue (due to poor muscle aerobic conditioning versus other physiologic abnormalities); decreased blood flow in the thalamus and caudate nucleus, leading to a lowering of the pain threshold; endocrine dysfunction such as abnormal pituitary-adrenal axis responses; and abnormal levels of the neurotransmitter serotonin in brain centers, which affect pain and sleep. Abnormal functioning of other pain-processing pathways may also be involved. Considerable overlap of symptoms with other pain syndromes, such as chronic fatigue syndrome, raises the question of an association with an infection such as with parvovirus B19. Human immunodeficiency virus (HIV) infection and Lyme disease have also been associated with FMS.
It’s possible that the development of FMS is multifactorial and is influenced by stress (physical and mental), physical conditioning, and quality of sleep as well as by neuroendocrine, psychiatric and, possibly, hormonal factors (because of the female predominance).
Signs and symptoms
The primary symptom of FMS is diffuse, dull, aching pain that’s typically concentrated across the neck, shoulders, lower back, and proximal limbs. It can involve all four body quadrants— bilateral upper trunk and arms and bilateral lower trunk and legs. The pain is typically worse in the morning and sometimes accompanied by stiffness. It can vary from day to day and be exacerbated by stress, lack of sleep, weather changes, and inactivity.
The sleep disturbance associated with FMS may be another factor in symptom development. Many patients with this syndrome describe a habit of being a light sleeper and experiencing frequent arousal and fragmented sleep (possibly secondary to pain in those patients who have underlying illnesses, such as osteoarthritis and rheumatoid arthritis). Other patients may report feeling unrefreshed after a night’s sleep. Because of this nonrestorative sleep pattern, the patient can feel fatigued a half hour to several hours after awakening and remain so for the remainder of the day.
Other clinical features associated with FMS include irritable bowel syndrome, tension headaches, “puffy hands” (sensation of hand swelling, especially in the morning), and paresthesias.
Diagnosis
Diagnostic testing for FMS (not associated with an underlying disease) doesn’t usually reveal significant abnormalities. For example, an examination of joints doesn’t reveal synovitis or significant swelling; a neurologic examination is normal; and no laboratory or radiologic abnormalities are common to FMS patients. Tenderness can be elicited by applying a moderate amount of pressure to specific locations. (See Tender points of fibromyalgia.) Although this examination can be fairly subjective, many FMS patients with true tender points wince or withdraw when pressure is applied to a tender point. Pressure can also be applied to nontender control points, such as the midforehead, distal forearm, and midanterior thigh, to assess for conversion reactions (psychogenic rheumatism), in which patients hurt everywhere, or for other psychosomatic illnesses.

Overall, the diagnosis of FMS is made clinically in a patient with characteristic symptoms and multiple tender points on examination, and after ruling out other illnesses that can cause similar features. A workup for arthritis, primary sleep disorders, endocrinopathies (such as hypothyroidism), infections (such as Lyme disease and HIV infection), and psychiatric illness (such as major depression) should be considered in the appropriate setting.
Treatment
The most important aspect of FMS management is patient education. Patients must understand that although FMS pain can be severe and is commonly chronic, this syndrome is common and doesn’t lead to deforming or life-threatening complications.
A regular, low-impact aerobic exercise program can help improve muscle conditioning, energy levels, and an overall sense of well-being. The FMS patient should stretch before and after exercising to minimize injury. Any exercise program, such as walking, bicycling, and swimming, should be started at a low intensity with a slow, gradual increase as tolerated. The patient may also benefit from physical therapy, the injection of tender points with steroids or lidocaine, massage therapy, and ultrasound treatments for particularly problematic areas. A few studies have shown that acupuncture and phototherapy as well as mind-body exercises, such as yoga and tai chi, are also beneficial.

Drug therapy is typically used to improve the patient’s quality of sleep and for pain control. A bedtime dose of a tricyclic antidepressant, such as amitriptyline, nortriptyline, or cyclobenzaprine, may improve sleep but produce anticholinergic adverse effects and daytime drowsiness. Hypnotic agents, such as many benzodiazepines, are less useful overall because they generally don’t prevent the frequent awakenings during the night in these patients. The combination of a tricyclic antidepressant at bedtime with a serotonin uptake inhibitor, such as fluoxetine, during the day may also be useful.
Nonsteroidal anti-inflammatory drugs (NSAIDs) and corticosteroids aren’t typically effective against FMS pain, although NSAIDs may be used if tendinitis or arthritis coexists with this disorder. Narcotics should be used only with extreme caution to control pain, preferably under the guidance of a pain clinic.
Special considerations

Posted by Ibrahim Hossain at 7:27 PM