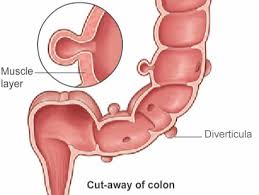 Diverticular disease is an outpouching of the colon, usually the sigmoid. It develops from the musculature in the colon working against increased intraluminal pressures to move hard stools through. Other typical sites are the duodenum, near the pancreatic border or the ampulla of Vater, and the jejunum. Diverticular disease of the stomach is rare and commonly a precursor of peptic or neoplastic disease. Diverticular disease of the ileum (Meckel’s diverticulum) is the most common congenital anomaly of the GI tract.
Diverticular disease has two clinical forms. In diverticulosis, diverticula are present but usually the patient is asymptomatic or the symptoms (abdominal pain, fluctuating bowel habits, constipation) are questionable because they may be related to underlying irritable bowel syndrome. In diverticulitis, diverticula are inflamed and may cause potentially fatal obstruction, infection, or hemorrhage.

Causes
Diverticular disease is most prevalent in men older than age 40 and is rarely found in cultures whose diets are high in residue. Diverticula probably result from high intraluminal pressure on areas of weakness in the GI wall, where blood vessels enter. Herniation of mucosa occurs through weak areas of the GI tract.
Diet may also be a contributing factor because lack of roughage reduces fecal residue, narrows the bowel lumen, and leads to higher intra-abdominal pressure during defecation. The fact that diverticulosis is most prevalent in Western industrialized nations, where processing removes much of the roughage from foods, supports this theory. Diverticulosis is less common in nations where the diet contains more natural bulk and fiber.
In diverticulitis, retained undigested food mixed with bacteria accumulates in the diverticular sac, forming a hard mass (fecalith). This substance cuts off the blood supply to the thin walls of the sac, making them more susceptible to attack by colonic bacteria.
Inflammation follows, possibly leading to perforation, abscess, peritonitis, obstruction, or hemorrhage. Occasionally, the inflamed colon segment may produce a fistula by adhering to the bladder or other organs.

Diverticulosis
Although diverticulosis usually produces no symptoms, it may cause recurrent left lower quadrant pain. Such pain, commonly accompanied by alternating constipation and diarrhea, is relieved by defecation or the passage of flatus. Symptoms resemble irritable bowel syndrome and suggest that both disorders may coexist.
In older patients, a rare complication of diverticulosis (without diverticulitis) is hemorrhage from colonic diverticula, usually in the right colon. Such hemorrhage is usually mild to moderate and easily controlled but may occasionally be life-threatening.

Diverticulitis
Mild diverticulitis produces moderate left lower abdominal pain, mild nausea, flatus, irregular bowel habits, low-grade fever, and leukocytosis. Constipation or loose stools and nausea and vomiting are usually present.
In severe diverticulitis, the diverticula can perforate and produce abscesses or peritonitis. Perforation occurs in up to 20% of such patients; its symptoms include peritoneal signs of abdominal rigidity and left lower quadrant pain.
Peritonitis follows release of fecal material from the perforation site and causes signs of sepsis and shock (high fever, chills, hypotension). Perforation of diverticulum near a vessel may cause microscopic or massive hemorrhage, depending on the vessel’s size.

Chronic diverticulitis may cause fibrosis and adhesions that narrow the bowel’s lumen and lead to bowel obstruction. Signs and symptoms of partial obstruction include constipation, thin-caliber stools, intermittent diarrhea, and abdominal distention. Complete obstruction symptoms include abdominal rigidity and pain, diminishing or absent bowel sounds, nausea, and vomiting.

Diagnosis
Diverticular disease frequently produces no symptoms and is commonly found incidental to an upper GI barium X-ray series. An upper GI series confirms diverticulosis of the esophagus and small bowel. Plain films are usually obtained to look for evidence of free abdominal air, ileus, or small- or large-bowel obstruction.
A barium enema confirms diverticulosis of the large bowel and can also identify a stricture or mass. Barium-filled diverticula can be single, multiple, or clustered like grapes and may have a wide or narrow mouth. Barium outlines, but doesn’t fill, diverticula blocked by impacted feces.
A biopsy will confirm cancer; however, colonoscopic biopsy isn’t recommended during acute diverticular disease because of the risk of perforation. Blood studies may show an elevated erythrocyte sedimentation rate in diverticulitis, especially if the diverticula are infected.

Treatment
The two forms of the disease call for different treatment regimens.

Diverticulosis
Asymptomatic diverticulosis generally doesn’t require treatment. Diverticulosis with pain, nausea, or constipation may respond to a liquid or low-residue diet, stool softeners, and occasional doses of mineral oil. These measures relieve symptoms, minimize irritation, and lessen the risk of progression to diverticulitis.
After pain subsides, patients also benefit from a low-residue diet and bulk medication such as psyllium (1 teaspoon twice a day) and increased water consumption (8 glasses per day).

Diverticulitis
Treatment of mild diverticulitis without signs of perforation aims to prevent constipation and combat infection. This includes bed rest, a liquid diet, stool softeners or bulking agents, a broad-spectrum antibiotic (such as metronidazole and ciprofloxacin or co-trimoxazole), meperidine to control pain and relax smooth muscle, and an antispasmodic such as propantheline to control muscle spasms.
Diverticulitis that doesn’t respond to medical treatment requires surgical resection.
Perforation, peritonitis, obstruction, or a fistula that accompanies diverticulitis may require a temporary colostomy to drain abscesses and rest the colon, 6 to 8 weeks after inflammation or infection subside. The colon can be reconnected.
Complications of diverticulitis include formation of fistulas involving any of the following: bladder, ureters, bowel, and abdominal wall. Diverticulitis can also cause colon stricture, which may result in partial or complete obstruction.
Patients who hemorrhage need blood replacement and careful monitoring of fluid and electrolyte balance. Such bleeding usually stops spontaneously.
If bleeding continues, angiography may be performed to guide catheter placement for infusing vasopressin into the bleeding vessel.
Posted by Ibrahim Hossain at 4:26 PM