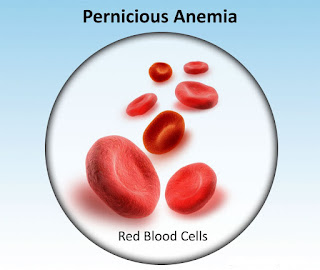 Pernicious anemia is a decrease in red blood cells that occurs due to impaired absorption of vitamin B-12 because of a lack of intrinsic factor (IF) in gastric secretions.

By definition, pernicious anemia refers specifically to vitamin B-12 deficiency resulting from a lack of production of IF in the stomach.

Pathology
Vitamin B12 cannot be produced by the human body, and must be obtained from the diet. Normally, dietary B12 is absorbed by the body in the small bowel only when it is bound by the intrinsic factor (IF) produced by parietal cells of the gastric mucosa. Pernicious anemia is thought to occur when the body’s immune system mistakenly targets the IF, with a loss of parietal cells. Insufficient IF results in insufficient absorption of the vitamin. Although the normal body stores three to five years’ worth of B12 in the liver, the usually undetected autoimmune activity in one’s gut over a prolonged period of time leads to B12 depletion and the resulting anemia. Inhibition of DNA synthesis in red blood cells results in the formation of large, fragile megaloblastic erythrocytes.

Clinical PresentationThe onset of pernicious anemia usually is insidious and vague. The classic triad of weakness, sore tongue, and paresthesias may be elicited but usually is not the chief symptom complex.

Common symptoms include fatigue, depression, forgetfulness, difficulty concentrating, low-grade fevers, nausea and gastrointestinal symptoms (heartburn), weight loss. Because PA may affect the spinal cord, symptoms may also include impaired urination, loss of sensation in the feet, unsteady gait, weakness, and clumsiness. Anemia may cause tachycardia (rapid heartbeat) and cardiac murmurs, along with a waxy pallor. In severe cases, the anemia may cause evidence of congestive heart failure.

Diagnosis
Workup for pernicious anemia may include the following:

Serum Cobalamin
The serum cobalamin level is low in patients with pernicious anemia.

Schilling test
The Schilling test measures cobalamin absorption by assessing increased urine radioactivity after an oral dose of radioactive cobalamin. The test is useful in demonstrating that the anemia is caused by an absence of IF and is not secondary to other causes of cobalamin deficiency. It is also useful for identifying patients with classic pernicious anemia, even after they have been treated with vitamin B-12.

Management: The following goals are the most important in establishing care for patients with pernicious anemia:
Dietary Advice
People who are strict vegetarians and, most particularly, people who do not consume eggs, milk, or meat can develop cobalamin deficiency. Counsel these people to either change their dietary habits or remain on supplementary vitamin B-12 therapy for their lifetime. An oral tablet of 100-200 µg taken weekly should provide adequate therapy.

Complications
People with pernicious anemia may have gastric polyps, and are more likely to develop gastric cancer and gastric carcinoid tumors.

Brain and nervous system problems may continue or be permanent if treatment is delayed.
Posted by Ibrahim Hossain at 6:04 AM

Email ThisBlogThis!Share to TwitterShare to FacebookShare to Pinterest
Labels: Hematology