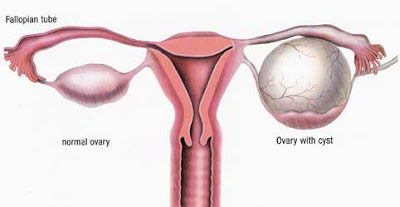 Introduction
Usually ovarian cysts are non-neoplastic sacs on an ovary that contain fluid or semisolid material. Although these cysts are usually small and produce no symptoms, they require thorough investigation as possible sites of malignant change.
Common ovarian cysts include follicular cysts, lutein cysts (granulosa-lutein [corpus luteum] and theca-lutein cysts), and polycystic (or sclerocystic) ovarian disease. Ovarian cysts can develop anytime between puberty and menopause, including during pregnancy. Granulosa-lutein cysts occur infrequently, usually during early pregnancy. The prognosis for nonneoplastic ovarian cysts is excellent.

Pathology
Follicular cysts are generally small and arise from follicles that overdistend instead of going through the atretic stage of the menstrual cycle. When such cysts persist into menopause, they secrete excessive amounts of estrogen in response to the hypersecretion of follicle-stimulating hormone and luteinizing hormone that normally occurs during menopause.
Granulosa-lutein cysts, which occur within the corpus luteum, are functional, nonneoplastic enlargements of the ovaries caused by excessive accumulation of blood during the hemorrhagic phase of the menstrual cycle.
Theca-lutein cysts are commonly bilateral and filled with clear, straw-colored fluid; they’re commonly associated with hydatidiform mole, choriocarcinoma, or hormone therapy (with human chorionic gonadotropin [HCG] or clomiphene citrate).

Polycystic ovarian disease is part of Stein-Leventhal syndrome and stems from endocrine abnormalities.

Large or multiple cysts may induce mild pelvic discomfort, low back pain, dyspareunia, or abnormal uterine bleeding secondary to a disturbed ovulatory pattern. Ovarian cysts with torsion induce acute abdominal pain similar to that of appendicitis.
Granulosa-lutein cysts that appear early in pregnancy may grow as large as 5 to 6 cm in diameter and produce unilateral pelvic discomfort and, if rupture occurs, massive intraperitoneal hemorrhage.
In nonpregnant women, these cysts may cause delayed menses, followed by prolonged or irregular bleeding.

Diagnosis
Generally, characteristic features suggest ovarian cysts. Visualization of the ovaries through ultrasound, laparoscopy, computed tomography scan, or surgery (commonly for another condition) confirms their presence. However, histologic examination is the only definitive method for an exact diagnosis.

Treatment
The type of cyst dictates the treatment method.

Follicular cysts
Follicular cysts generally don’t require treatment because they tend to disappear spontaneously within 60 days. Although hormonal treatment (such as birth control pills) is frequently prescribed, no evidence exists that it has any effect on treatment or prevention of functional ovarian cyst.

Polycystic ovarian disease
Treatment of polycystic ovarian disease may include the administration of such drugs as clomiphene citrate to induce ovulation, medroxyprogesterone acetate for 10 days of every month for the patient who doesn’t want to become pregnant, or a low-dose hormonal contraceptive for the patient who needs reliable contraception.

Surgery, in the form of laparoscopy or exploratory laparotomy with possible ovarian cystectomy or oophorectomy, may become necessary if an ovarian cyst is found to be persistent or suspicious.
Posted by Ibrahim Hossain at 3:34 PM