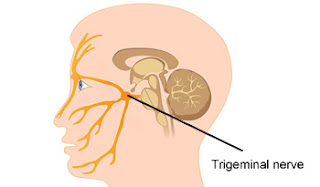 Introduction
Also called tic douloureux, trigeminal neuralgia is a painful disorder of one or more branches of the fifth cranial (trigeminal) nerve that produces paroxysmal attacks of excruciating facial pain precipitated by stimulation of a trigger zone.

It occurs mostly in people over age 40, in women more often than men, and on the right side of the face more often than the left. Trigeminal neuralgia can subside spontaneously, with remissions lasting from several months to years.
Etiology
Although the cause remains undetermined, trigeminal neuralgia may:
Whatever the cause, the pain of trigeminal neuralgia is probably produced by an interaction or short-circuiting of touch and pain fibers.
Clinical Features
Typically, the patient reports a searing or burning pain that occurs in lightning-like jabs and lasts from 1 to 15 minutes (usually 1 to 2 minutes) in an area innervated by one of the divisions of the trigeminal nerve, primarily the superior mandibular or maxillary division.
The pain rarely affects more than one division, and seldom the first division (ophthalmic) or both sides of the face. It affects the second (maxillary) and third (mandibular) divisions of the trigeminal nerve equally.
These attacks characteristically follow stimulation of a trigger zone, usually by a light touch to a hypersensitive area, such as the tip of the nose, the cheeks, or the gums. Although attacks can occur at any time, they may follow a draft of air, exposure to heat or cold, eating, smiling, talking, or drinking hot or cold beverages.
The frequency of attacks varies greatly, from many times a day to several times a month or year. Between attacks, most patients are pain-free, although some have a constant, dull ache. No patient is ever free from the fear of the next attack.
Diagnosis
The patient’s pain history is the basis for diagnosis because trigeminal neuralgia produces no objective clinical or pathologic changes. Physical examination shows no impairment of sensory or motor function; indeed, sensory impairment implies a space-occupying lesion as the cause of pain.
Observation during the examination shows the patient favoring (splinting) the affected area. To ward off a painful attack, the patient often holds his face immobile when talking. He may also leave the affected side of his face unwashed and unshaven, or protect it with a coat or shawl.
When asked where the pain occurs, he points to—but never touches—the affected area. Witnessing a typical attack helps to confirm the diagnosis. Rarely, a tumor in the posterior fossa can produce pain that’s clinically indistinguishable from trigeminal neuralgia. Skull X-rays, tomography, and computed tomography scan rule out tumors and sinus or tooth infections.
Treatment

Posted by Ibrahim Hossain at 7:43 PM