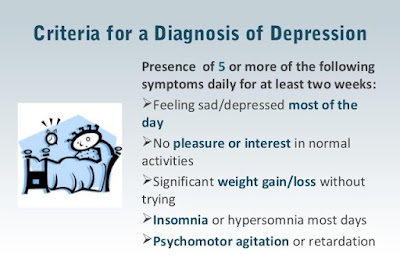 Introduction
Also known as unipolar disorder, major depression is a syndrome of persistently sad, dysphoric mood accompanied by disturbances in sleep and appetite, lethargy, and an inability to experience pleasure (anhedonia). Major depression occurs in 3% to 5% of adults, affecting all racial, ethnic, and socioeconomic groups. It affects both sexes but is more common in wo
About half of all depressed patients experience a single episode and recover completely; the rest have at least one recurrence. Major depression can profoundly alter social, family, and occupational functioning.
However, suicide is the most serious complication of major depression, resulting when the patient’s feelings of worthlessness, guilt, and hopelessness are so overwhelming that he no longer considers life worth living. Nearly twice as many women as men attempt suicide, but men are far more likely to succeed.
Causes
The multiple causes of depression aren’t completely understood. Current research suggests possible genetic, familial, biochemical, physical, psychological, and social causes.
Psychological factors
Such causes may include feelings of helplessness and vulnerability, anger, hopelessness and pessimism, and low self-esteem; they may be related to abnormal character and behavior patterns and troubled personal relationships.
In many patients, the history identifies a specific personal loss or severe stressor that probably interacts with the person’s predisposition to provoke major depression.
Medical conditionsDepression may be secondary to a specific medical condition—for example, metabolic disturbances, such as hypoxia and hypercalcemia; endocrine disorders, such as diabetes and Cushing’s disease; neurologic diseases, such as Parkinson’s and Alzheimer’s disease; and cancer, especially of the pancreas.
Other medical conditions that may underlie depression include viral and bacterial infections, such as influenza and pneumonia; cardiovascular disorders such as heart failure; pulmonary disorders such as chronic obstructive pulmonary disease; musculoskeletal disorders such as degenerative arthritis; GI disorders such as irritable bowel syndrome; genitourinary problems such as incontinence; collagen vascular diseases such as lupus; and anemias.
Drugs
Drugs prescribed for medical and psychiatric conditions as well as many commonly abused substances, can also cause depression. Examples include antihypertensives, psychotropics, narcotic and nonnarcotic analgesics, antiparkinsonian drugs, numerous cardiovascular medications, oral antidiabetics, antimicrobials, steroids, chemotherapeutic agents, cimetidine, and alcohol.
Signs and symptoms
The primary features of major depression are a predominantly sad mood and a loss of interest or pleasure in daily activities. Symptoms tend to be more severe than those caused by dysthymic disorder, which is a milder, chronic form of depression
The depressive patient may complain of feeling “down in the dumps,” express doubts about his self-worth or ability to cope, or simply appear unhappy and apathetic. He may also report feeling angry or anxious.
Other common signs include difficulty concentrating or thinking clearly, distractibility, and indecisiveness. Take special note if the patient reveals suicidal thoughts, a preoccupation with death, or previous suicide attempts.
The psychosocial history may reveal life problems or losses that can account for the depression. Alternatively, the patient’s medical history may implicate a physical disorder or the use of prescription, nonprescription, or illegal drugs that can cause depression.
The patient may report an increase or a decrease in appetite, sleep disturbances (for example, insomnia or early awakening), a lack of interest in sexual activity, constipation, or diarrhea. Other signs that you may note during a physical examination include agitation (such as hand wringing or restlessness) and reduced psychomotor activity (for example, slowed speech)
Diagnosis
The DSM-IV-TR describes specific characteristics of patients with this condition.

The diagnosis of major depression is supported by psychological tests, such as the Beck Depression Inventory, which may help determine the onset, severity, duration, and progression of depressive symptoms. A toxicology screening may suggest drug-induced depression.
Posted by Ibrahim Hossain at 8:59 AM