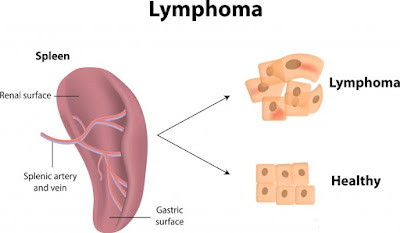 Also known as non-Hodgkin’s lymphomas and lymphosarcomas, malignant lymphomas are a heterogeneous group of malignant diseases originating in lymph glands and other lymphoid tissue. Nodular lymphomas have a better prognosis than the diffuse form of the disease, but in both, the prognosis is worse than in Hodgkin’s disease.

Causes
The cause of malignant lymphomas is unknown, although some theories suggest a viral source.

Incidence
Up to 35,000 new cases appear annually in the United States. Malignant lymphomas are two to three times more common in males than in females and occur in all age-groups.
Although rare in children, these lymphomas occur one to three times more often and cause twice as many deaths as Hodgkin’s disease in children under age 15. Incidence rises with age (median age is 50). Malignant lymphomas seem linked to certain races and ethnic groups, with increased incidence in whites and people of Jewish ancestry.
Signs and symptoms
Usually, the first indication of malignant lymphoma is swelling of the lymph glands, enlarged tonsils and adenoids, and painless, rubbery nodes in the cervical or supraclavicular areas. In children, these nodes are usually in the cervical region, and the disease causes dyspnea and coughing.
As the lymphoma progresses, the patient develops symptoms specific to the area involved and systemic signs and symptoms, such as fatigue, malaise, weight loss, fever, and night sweats.
Diagnosis
A positive diagnosis requires histologic evaluation of biopsied lymph nodes of tonsils, bone marrow, liver, bowel, or skin or of tissue removed during exploratory laparotomy. A biopsy differentiates malignant lymphoma from Hodgkin’s disease.
Other tests include bone and chest X-rays, lymphangiography, a liver and spleen scan, computed tomography scan of the abdomen, and excretory urography. Laboratory tests include a complete blood cell count (which may show anemia), uric acid level (elevated or normal), serum calcium level (elevated if bone lesions are present), serum protein level (normal), and liver function studies.
Treatment
Radiation therapy is used mainly in the early localized stage of the disease. Total nodal irradiation is usually effective for nodular and diffuse histologies.
Chemotherapy is most effective with multiple combinations of antineoplastics; remissions and cures may be induced in this manner. Some cases have required intrathecal chemotherapy. Bone marrow and stem cell transplants have also proved helpful.
Posted by Ibrahim Hossain at 8:54 AM

Email ThisBlogThis!Share to TwitterShare to FacebookShare to Pinterest
Labels: Oncology