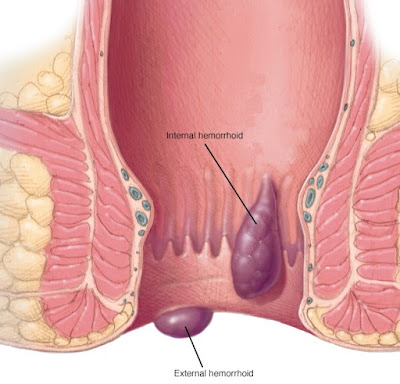 Predisposing factors include
Other factors include hepatic disease, such as cirrhosis, amebic abscesses, or hepatitis; alcoholism; and anorectal infections.

Treatment
Treatment depends on the type and severity of the hemorrhoids.

Patients can relieve constipation by consuming a high-fiber diet and increasing fluid intake by drinking eight to ten 8-oz glasses of water per day or by using bulking agents such as psyllium.
Venous congestion can be prevented by avoiding prolonged sitting on the toilet; local swelling and pain can be decreased with local anesthetic agents (lotions, creams, or suppositories) or astringents.

Hydrocortisone suppositories may be used for edematous, prolapsed hemorrhoids in combination with warm sitz baths.
Hemorrhoids may be treated with injection sclerotherapy and rubber band ligation. Infrared photocoagulation bipolar diathermy may be used to affix the mucosa to the underlying muscle.

Hemorrhoidectomy
Hemorrhoidectomy is performed for patients with severe bleeding and those with thrombosed hemorrhoids. This procedure is contraindicated in patients with blood dyscrasias (acute leukemia, aplastic anemia, or hemophilia) or gastric cancer and during the first trimester of pregnancy.
Posted by Ibrahim Hossain at 12:44 PM