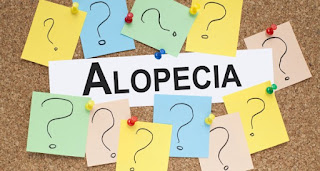 Alopecia, or hair loss, usually occurs on the scalp; hair loss elsewhere on the body is less common and less conspicuous. In the nonscarring form of this disorder (noncicatricial alopecia), the hair follicle can generally regrow hair. But scarring alopecia usually destroys the hair follicle, making hair loss irreversible.

Causes
The most common form of nonscarring alopecia is male pattern alopecia, which appears to be related to androgen levels and to aging. Genetic predisposition commonly influences the time of onset, degree of baldness, speed with which it spreads, and pattern of hair loss. Women may experience a similar disorder, called androgenetic alopecia, characterized by diffuse thinning over the top of the scalp.

Signs and symptoms
With male pattern alopecia, hair loss is gradual and usually affects the thinner, shorter, and less pigmented hairs of the frontal and parietal portions of the scalp. In women, hair loss is generally more diffuse; completely bald areas are uncommon, but they may occur.
Alopecia areata affects small patches of the scalp but may also occur as alopecia totalis, which involves the entire scalp, or as alopecia universalis, which involves the entire body. Although mild erythema may occur initially, affected areas of scalp or skin appear normal. “Exclamation point” hairs (loose hairs with dark, rough, brushlike tips on narrow, less-pigmented shafts) occur at the periphery of new patches. Regrowth initially appears as fine, downy hair, which is replaced by normal hair.
In trichotillomania, patchy, incomplete areas of hair loss with many broken hairs appear on the scalp, although they may occur on other areas such as the eyebrows.

Diagnosis
Physical examination is usually sufficient to confirm alopecia. In trichotillomania, an occlusive dressing can help establish a diagnosis by allowing new hair to grow, revealing that the hair is being pulled out. The diagnosis must also identify any underlying disorder.

Treatment
Some physicians have had limited success in treating male pattern alopecia with topical minoxidil, a peripheral vasodilator that’s more typically used as an oral antihypertensive. Also available is the deoxyribonucleic acid drug finasteride, which has been approved for use in men. Another treatment is surgical redistribution of hair follicles by autografting.
In alopecia areata, treatment may be unnecessary because spontaneous regrowth is common. Intralesional corticosteroid injections are beneficial for small patches and may produce regrowth in 4 to 6 weeks. High-potency topical steroids are less effective. Hair loss that persists for more than a year has a poor prognosis for regrowth.
Treatment of other types of alopecia varies according to the underlying cause.

Posted by Ibrahim Hossain at 4:03 PM

Email ThisBlogThis!Share to TwitterShare to FacebookShare to Pinterest
Labels: Dermatology