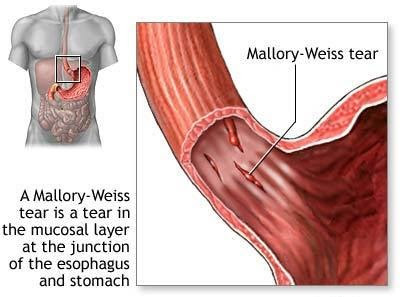 Mild to massive and usually painless bleeding due to a tear in the mucosa or submucosa of the cardia or lower esophagus characterizes Mallory-Weiss syndrome. Such a tear, usually singular and longitudinal, results from prolonged or forceful vomiting. About 60% of these tears involve the cardia; 15%, the terminal esophagus; and 25%, the region across the esophagogastric junction. Mallory-Weiss syndrome is most common in men older than age 40, especially alcoholics.

Causes
The direct cause of a tear in Mallory-Weiss syndrome is forceful or prolonged vomiting, probably when the upper esophageal sphincter fails to relax during vomiting. This lack of sphincter coordination is more common after excessive intake of alcohol. Other factors and conditions that may also increase intra-abdominal pressure and predispose to esophageal tearing include coughing, straining during bowel movements, trauma, seizures, childbirth, hiatal hernia, esophagitis, gastritis, and atrophic gastric mucosa.

Signs and symptoms
Typically, Mallory-Weiss syndrome begins with the vomiting of blood or the passing of large amounts of blood rectally a few hours to several days after normal vomiting. This bleeding, which may be accompanied by epigastric or back pain, may range from mild to massive but is generally more profuse than in esophageal rupture.
In patients with Mallory-Weiss syndrome, the blood vessels are only partially severed, preventing retraction and closure of the lumen. Massive bleeding—most likely when the tear is on the gastric side, near the cardia—may quickly lead to fatal shock.

Diagnosis
Identifying esophageal tears by fiber-optic endoscopy confirms Mallory-Weiss syndrome. These lesions, which usually occur near the gastroesophageal junction, appear as erythematous longitudinal cracks in the mucosa when recently produced and as raised, white streaks surrounded by erythema when older. Other helpful diagnostic measures include the following:
Treatment
Appropriate treatment varies with the severity of bleeding. Usually, GI bleeding stops spontaneously, requiring supportive measures and careful observation but no definitive treatment. However, if bleeding continues, treatment may include:

Posted by Ibrahim Hossain at 6:52 PM