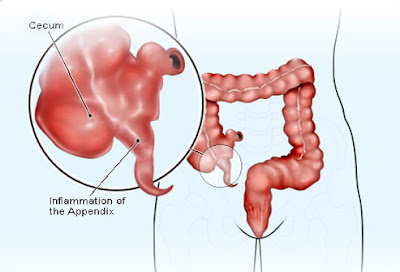 The most common abdominal surgical disease, appendicitis is inflammation of the vermiform appendix due to an obstruction. Although appendicitis may occur at any age and affects both sexes equally, it’s most common between puberty and age 30. Since the advent of antibiotics, the incidence and the death rate of appendicitis have declined. If left untreated, gangrene and perforation develop within 36 hours.

Causes
Appendicitis probably results from an obstruction of the intestinal lumen caused by a fecal mass, stricture, barium ingestion, or viral infection. This obstruction sets off an inflammatory process that can lead to infection, thrombosis, necrosis, and perforation. If the appendix ruptures or perforates, the infected contents spill into the abdominal cavity, causing peritonitis, the most common and most perilous complication of appendicitis.

Signs and symptoms
Appendicitis usually begins with generalized or localized colicky periumbilical or epigastric pain, followed by anorexia, nausea, and a few episodes of vomiting. Pain eventually localizes in the right lower quadrant of the abdomen (McBurney’s point), with abdominal “boardlike” rigidity, retractive respirations, increasing tenderness, increasingly severe abdominal spasms and, almost invariably, rebound tenderness. (Rebound tenderness on the opposite side of the abdomen suggests peritoneal inflammation.)
Later signs and symptoms include constipation (although diarrhea is also possible), slight fever, and tachycardia. Sudden cessation of abdominal pain indicates a perforation or infarction of the appendix. The elderly patient may present with minimal, vague symptoms and mild abdominal tenderness, delaying diagnosis of appendicitis.

Diagnosis
Characteristic signs and symptoms allow diagnosis of appendicitis. Those that support the diagnosis include a temperature of 99° to 102° F (37.2° to 38.9° C) and a moderately elevated white blood cell count (12,000 to 20,000/µl), with increased numbers of immature cells.
The diagnosis must rule out illnesses with similar signs and symptoms: gastritis, gastroenteritis, ileitis, colitis, diverticulitis, pancreatitis, renal colic, bladder infection, and gynecologic disorders, such as ovarian cyst, acute salpingitis, and tubo-ovarian abscess.
Imaging studies are unnecessary in patients with a typical presentation of appendicitis.

Treatment
Appendectomy is the only effective treatment. Laparoscopic appendectomies, which decrease the recovery time and the facility stay, are now performed. If peritonitis develops, treatment involves GI intubation, parenteral replacement of fluids and electrolytes, and administration of an antibiotic.

Posted by Ibrahim Hossain at 12:51 PM