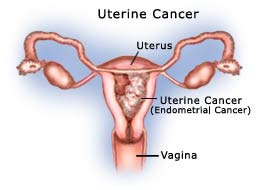 Cancer of the endometrium, or uterine cancer, is the most common gynecologic cancer. It usually affects postmenopausal women between ages 50 and 60; it’s uncommon between ages 30 and 40 and extremely rare before age 30. Most premenopausal women who develop uterine cancer have a history of anovulatory menstrual cycles or another hormonal imbalance.

Incidence
Uterine cancer has an incidence of 1% to 2% in the United States.

Causes
Uterine cancer seems linked to several predisposing factors:
Pathology
Generally, uterine cancer is an adenocarcinoma that metastasizes late, usually from the endometrium to the cervix, ovaries, fallopian tubes, and other peritoneal structures. It may spread to distant organs, such as the lungs and the brain, through the blood or the lymphatic system. Lymph node involvement can also occur. Less common uterine tumors include adenoacanthoma, endometrial stromal sarcoma, lymphosarcoma, mixed mesodermal tumors (including carcinosar- coma), and leiomyosarcoma.

Signs and symptoms
Uterine enlargement and persistent and unusual premenopausal bleeding, or any postmenopausal bleeding, are the most common indications of uterine cancer. The discharge may at first be watery and blood-streaked but gradually becomes more bloody. Other symptoms, such as pain and weight loss, don’t appear until the cancer is well advanced.

Diagnosis
Unfortunately, a Pap smear, so useful for detecting cervical cancer, doesn’t dependably predict early-stage uterine cancer. Diagnosis of uterine cancer requires endometrial biopsy and the following tests for baseline data and staging:
Treatment
Uterine cancer treatment varies, depending on the extent of the disease. Generally, treatment involves surgery and radiation therapy, depending on the stage and depth of the myometrial invasion.

Radiation therapy
When the tumor isn’t well differentiated, intracavitary or external radiation (or both), given 6 weeks before surgery, may inhibit recurrence and lengthen survival time.

Hormonal therapy
Synthetic progesterones—such as hydroxyprogesterone or megestrol—may be administered for systemic disease. Tamoxifen, which produces a 20% to 40% response rate, may be given as a second-line treatment.

Chemotherapy
Chemotherapy is not very successful in advanced endometrial carcinoma. Varying combinations of cisplatin, doxorubicin, carboplatin, or paclitaxel, as well as others, are usually tried when other treatments have failed.
Posted by Ibrahim Hossain at 1:04 PM