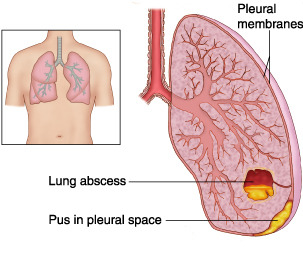 Complications include rupture into the pleural space, which results in empyema and, rarely, massive hemorrhage. A chronic lung abscess may cause localized bronchiectasis. Failure of an abscess to improve with antibiotic treatment suggests a possible underlying neoplasm or another cause of obstruction.

Diagnosis
The following tests are used to diagnose a lung abscess:
Treatment
Antibiotic therapy may last for months until radiographic resolution or definite stability occurs. Symptoms usually disappear in a few weeks. Postural drainage may facilitate discharge of necrotic material into upper airways, where expectoration is possible; oxygen therapy may relieve hypoxemia. A poor response to therapy requires resection of the lesion or removal of the diseased section of the lung. All patients need rigorous follow-up and serial chest X-rays.
Posted by Ibrahim Hossain at 1:05 PM